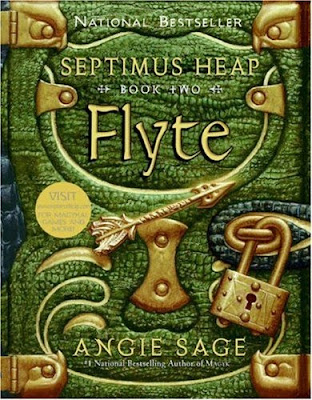 Published in 2006 by Bloomsbury.

It is night on the Marram Marshes; a full moon shines down on the black waters and illuminates the night-time Things who are going about their business. Silence hangs in the air, broken occasionally by the glugs and gurgles of the Quake Ooze as the creatures tha tlive beneath it make their way to a feast. A huge ship with a full complement of sailors has sunk into the Ooze and Things are hungry- but they will have to fight the Quake Ooze Brownies for the leftovers.

This is the second book in the Septimus Heap series. I reviewed the first one, Magyk , here.

This is not going to be a long post, as it would be pointless for you to read if you have not read the first book in the series. All I will tell you about the story line is that Septimus has now become the ExtraOrdinary Wizard's Apprentice and is quickly becoming a very capable magician. During this book, his sister, the Princess has been kidnapped by someone meddling in the Darke side. Septimus is shocked by the identity of the kidnapper and with the help of his family sets out to rescue her and save the ExtraOrdinary Wizard at the same time.

I am really enjoying this series of books. As a sequel, it did not disappoint, in fact I thought the storyline was actually an improvement on the first and seemed to have a better direction. Septimus has grown in character and strength and now has more belief in his potential as a Wizard. You cannot help but love the characters in the book.

Within this book, the Darke side, gets darker and nastier, in the same way that the Harry Potter books get darker with each one.

These books are long, but really are quite quick to read. I know you are probably gulping like I did at the length at the book, but the pages are actually quite small in length.

The book has the most beautiful illustrations in it, just like the last. Unfortunately I forgot to take pictures of some of them before I took it back to the library, so if you happen to see a copy in a bookstore, do have a look at the pictures. They are truly awesome.