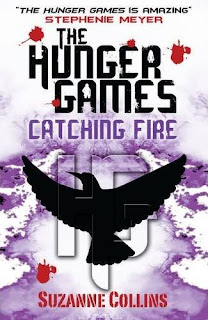 Published by Scholastic in 2009

Catching Fire is the second book in the Hunger Games trilogy. It follows the story of Katniss and Peeta after they win the Hunger Games. Both books are written in present tense, which keeps you on your toes the whole way through., however it doesn't affect your enjoyment of it, as you completely lose yourself in the prose. This book is not as fast paced as the first one, but I felt that this was a good thing. I could take my time to find out what had happened to the characters and their families since the end of the games. If you haven't read The Hunger Games, then I wouldn't read any further as I don't want to spoil it for you. You will find my review of The Hunger Games here.

I enjoyed this book a lot, not as much as the first one, but I still really enjoyed it. I have sat and pondered why I felt it wasn't to the same standard as the first and I came to the following conclusion. Spoiler Alert!!!

I didn't like the fact that both contestants had to return to the The Hunger Games. I felt that the story could have gone a different way, rather than repeating a situation already used within the first book. I felt it had been done already, even though the circumstances surrounding their return were different. I do hope that the final book doesn't follow a similar pattern as I will be really disappointed.

Apart from that niggling point, it was good. I think the best part of this book was the relationship triangle between Katniss, Peeta and Gale. In public, Katniss is being made to show affection for Peeta, who is completely in love with her, yet in private her feelings are only for Gale. The love story is such a big part of the story and a lot of the actions with the book are propelled by this. Secretly I am hoping that Katniss ends up with Peeta, as he just gets Katniss completely. I suppose where he has experienced such awful events with Katniss, he will always know how she feels.

I still think Katniss is a fabulous character. She is such a strong female role model, who will go to great lengths to protect her family and friends. She appears to be much stronger than Peeta, but you can't help but love him too. Peeta will do anything for Katniss, even die for her.

I have to say the plot twist at the end was completely unexpected. I finished reading the book stunned by its ending. I really didn't have a clue.

Definitely worth reading, but do start with The Hunger Games as I don't feel this is a book that could be stand alone.

Life and Times of a "New " New Yorker

Hello, My Name Is Alice

At Home With Books