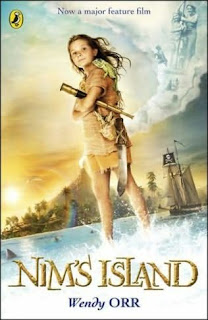 Published by Puffin Books in 2008

'In a palm tree, on an island, in the middle of the wide blue sea, was a girl.

Nim's hair was wild, her eyes were bright, and round her neck she wore thre cords. One was a spyglass, one was a whirly, whistling shell and the other a fat read pocket knife in a sheath.

Whilst searching for Australian Authors for the Aussie Challenge I discovered that Wendy Orr was now considered an Aussie. She emigrated a few years ago and has now got her citizenship, so I thought she would be ideal to read for the challenge.

I have watched Nim's Island so many times with my girls, that I do feel it is up there in my list of favourite films. With this in mind, I was desperate to see if the book lived up to the film.

I found it to be a lovely book, very easy to read, definitely enjoyable, but quite different from the film.

In the film, Nim's father disappears whilst caught up in a storm and Nim is left to survive on their secret island on her own. Her only form of contact is with the writer Alex Rover, who Nim is convinced is the same intrepid explorer she reads about in her books. Alex Rover is really Alexander Rover, the author who suffers from OCD and is agoraphobic; she hasn't left her apartment in months and spends all her days talking to her imaginary character Alex Rover. In the end Alexander Rover comes to Nim's rescue, only to shatter her illusions about the Alex Rover she believed she was contacting.

From the first page of the book, it is apparent that Jack has already left Nim on his journey to find new species of plankton. Where in the film, he loses contact with her, within the book they manage to communicate by attaching letters to Galileo's (a friendly pelican) leg, so Nim is never in fear that her father has been lost at sea.

The Alexandra Rover within the book is completely different from the one in the film, as she has absolutely no hang ups and doesn't talk to imaginary characters. She is only to eager to correct Nim's perception of her and from the very beginning Nim is aware that Alex is actually a lady writer called Alexandra and not an intrepid explorer and adventurer. The book character of Alex Rover was not as visual within the book, as he was in the film, in fact he is hardly mentioned at all.

I felt the book was less dramatic than the film version, but still very entertaining and definitely one I would recommend for children.

The film was obviously beefed up to make it more screen worthy and the characters were given a lot more traits to deal with. Trying to decide which I liked best, I found that I couldn't decide; they were both equally good in their own way and often seemed like two different stories.

If you like reading about islands of paradise and adventures at see, then this is a book you will definitely enjoy.