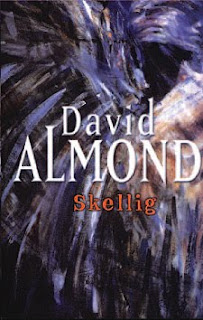 Pages - 170
Published by Hodder Children's Books in 1998
Challenges - Awesome Author Challenge, Young Adult Challenge and Support Your Library Challenge
He was lying there in the darkness behind the tea chests, in the dust and dirt. It was as if he'd been there forever. He was filthy and pale and dried out and I thought he was dead. I couldn't be more wrong. I'd soon begin to see the truth about him, that there'd never been another creature like him in the world.
All I can say is, why on earth didn't I read this book sooner. I absolutely adored this book and thank everyone who kept recommending that I read this one. I just loved it.
Michael and his family have moved to a new house which is in desperate need of some love and attention. His father is preoccupied with fixing the house up and his mother is totally involved in Michael's new baby sister. Everything is wonderful, until his baby sister becomes really ill and is rushed to hospital. Michael is at a loss as how to help and feels confused and lost.
He then ventures into the decrepit crumbling garage at the bottom of the garden and finds a creature covered in dead spiders and flies. Michael is dumbfounded and confused by the creature in the garage, but his kind heart gets the better of him and with the help of his new friend Mina, they bring the creature back to good health. The creature,Skellig, turns out to be an angel fallen on hard times and is grateful for their help and belief in him and in return he helps to ease Michael's pain.
This book is just so beautiful to read. I absorbed every word of it and I was really disappointed when I had finished reading it. Skellig is an unlikely hero, but so unique and very believable. He shows you that it is not what is on the outside that matters, it is what lies within your heart. He is what I would call a realistic angel. I could actually believe he existed as Almond's writing was so realistic.
Michael and Mina are wonderful characters and warmed my heart towards the teenage generation immediately. They were not frightened by what they saw, but looked beyond Skellig's rough exterior to find a hidden angel. They wanted to help him from the start, which I just think is wonderful.
I usually feel that British writers just don't do the whole paranormal thing well, (apart from Neil Gaiman, I bow at his feet). Most paranormal books I have enjoyed have been written by Americans and I had yet to find an English equivalent, especially within the YA market, yet David Almond just blew me away with this book.
I am quite excited because I have two other David Almond books in my possession - The Fire Eaters and Jackdaw Summer, so I will be having a bit of a David Almond fest soon.
If have even the slightest belief in angels, then this is the book for you.
Other reviews of this book
Hello, My Name is Alice
Things Mean Alot