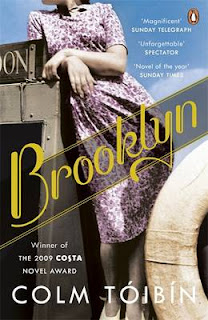 Pages - 252
Published by Penguin Books in 2009
Challenges - New York Challenge and What's in a Name Challenge
Eilis Lacey, sitting at the window of the upstairs living room in the house on Friary Street , noticed her sister walking briskly from work. She watched Rose crossing the street from sunlight into shade, carrying the new leather handbag that she had bought in Clery's in Dublin in the sale. Rose was wearing a cream-coloured cardigan over her shoulders. Her golf clubs were in the hall: in a few minutes , Eilis knew, someone would call for her and her sister would not return until the summer evening had faded.
This is the story of Eilis, who unable to find regular work in her home town is packed off by her sister to live in Brooklyn, New York, where it is hoped a new life will await her. Eilis is frightened by the prospect of this new life and the thought of leaving her family, but she doesn't show it and she ventures off to the unknown. Her journey to America by boat, is long and arduous and by the time Eilis arrives, she is exhausted.
Father Flood, an acquaintance of her sister, helps her to settle into her rooms at Mrs Kehoes and takes her to her new job at the department store. At first, Eilis, is living in dream world, yet a few weeks later, homesickness sets in and she begins to struggle with her new life. Father Flood steps in to ease her pain and soon finds her an evening course to keep her occupied. As time passes, Eilis settles well into her new life and soon meets an Italian boy and romance blossoms. As her second year in Brooklyn nears an end, life in Ireland is put back into the forefront of her mind and she knows that she must go home to deal with the situation that has arisen. Will she decide to stay in Ireland or will Brooklyn softly call her name, yearning for her return.
How on earth has a writer as brilliant as Colm Toibin, slipped past my radar. I was utterly gobsmacked by this book. The way it is written is beautiful and within the first chapter, you are lost in the world of the characters. The story is a very simple one and not overloaded with drama, yet it has your attention and your thirst for more, right from the start. I was amazed that Toibin could create such an absorbing book from such a simple story.
The sentences are long and packed full of detail, so you don't feel that you are missing any aspect of the story. Toibin is definitely a very visual writer and his words convey such beautiful and interesting pictures.
Eilis appears at the beginning of the book as very young and naive, but after spending some time living independently you begin to watch Eilis grow into her own personality and become a woman of similar substance to her beloved sister. Eilis knows which direction she wants her life to go and doesn't feel that any of her decisions are hasty, yet one decision really does affect her choices at the end of the book.
I couldn't help but feel that Eilis's mother relied far too heavily on her daughters. Her daughter Rose, pays all the bills and keeps a roof over her mother's head. When Eilis returns, her mother seems to play on her emotions to try and keep her in Ireland and makes decisions for her, rather than allowing Eilis to decide for herself.
I loved the feel of Brooklyn during the 1950's. It sounded so vibrant and full of life and very multi cultural, yet with each group of immigrants keeping within their own groups and bringing a piece of their country to America.
The ending of the book left me in deep thought. I wondered whether I would have made the same decision as Eilis did. I felt that she had been sent to Brooklyn against her will, yet now that her previous life has changed, she is expected to give up her new life and return home. It reminded me of the phrase,'taking candy from a baby'. I felt that she was being treated like a chess piece and her mother could move her around depending on her whim.
This is definitely a book that stays with you once you have finished it. It is over a week since I read it, yet I still keep on returning to scenes in the book in my mind. I kept wondering how Eilis's life would turn out after the decision she made.
I am now an official fan of Colm Toibin and can't wait to read more of his books.
Other reviews of this book
The Literary Stew
Bibliophile By The Sea
Paperback Reader