Anyone notice my absence since Thursday. Nope, oh good. I am sorry, but I have had a mega busy weekend. Starting with dinner and a movie on Friday night, with my best buddy. We went to see Eclipse followed by dinner at Nando's - fabulous evening. Saturday was spent felt making at school with the girls all day, followed by the local carnival in the evening and fish and chips on the beach. I hope to show you some pictures from it later in the week. Sunday and today have been spent away with my husband in Brighton. So I can't tell you much about that as I am still away and this was written before I went, so I will let you know tomorrow if I have had a good time! 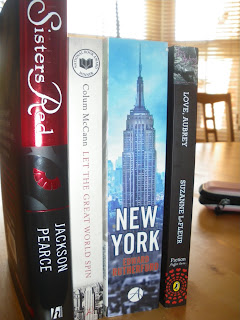 Thought I would share my four new books that I picked up last Thursday after spending an hour searching for a fancy dress costume for my nephew. I find it very difficult to buy presents for other people and not for myself. Is that just me or does everyone have this problem.

1) Sisters Red by Jackson Pearce - countless teenagers have been brutally murdered and Scarlet and Rosie know how they died; torn apart by werewolves. A fabulous YA book with elements of Little Red Riding Hood, I believe.

2) Let The Great World Spin by Colum McCann - New York in 1974. A man is walking in the sky between the newly built Twin Towers. Below him, the lives of complete strangers spin towards each other.

3) New York - Edward Rutherford - I have wanted this book since I saw it first came out in hardback. It is mammoth! The sweeping saga of the most exciting city on earth. Following three hundred years of history from the city's birth, to the heroism of 9/11.

As you may have noticed that is two New York books I have purchased. They have been bought for a reason, as I have decided to divert slightly from my alphabetical tour of America and go to New York next, instead of Alaska, which was to be my next stop.

4) Love Aubrey by Suzanne Lefleur - I have heard such good things about this book,but I do know it is sad too. This book is about eleven year old Aubrey who is on her own after something terrible happens. She is determined to hide away and take care of herself. Until the letters from her grandmother help her come to terms with her loss.

Some fabulous books to keep me busy over the coming summer months. Has anyone read any of these?