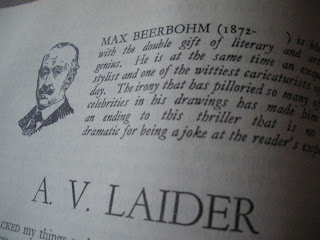 Before I start I must  tell you  something I love about this book. If you look at the picture you will see that the author's death is not recorded. I love that that shows how old this book is.  This book was printed in 1934 when the author was still alive.

This short story is told from the point of view of a gentleman residing by the sea in order to convalesce after a bout of flu. (If only we could go away to convalesce now when we have flu).  His trip is a return trip to the hotel and he finds himself quite stunned to find a letter pinned to the noticeboard that he wrote himself to a guest on his previous visit. He recalled his acquaintance with the guest the previous and remembered the story he had been told.

A.V. Laider had been reluctant to talk at first, but then he admitted to murder.  He believed he was guilty of murdering many people due to his skill of palmistry.  He had seen signs within their hands that revealed their imminent death.  The narrator is quite shocked by the story and finds himself compelled to write to A.V. Laider, only the receiver never managed to pick up his letter until now.

A.V. Laider was an interesting read, though I have to say I did not enjoy it as much as my first Tale of Mystery. Well that was my initial reaction anyway. However, the more I mulled over this story in my head, the more it grew on me. I found that the author is very clever at planting a seed in your head, that blossoms into a tree by the time your ready to review it.

Like the previous short story,  this one has an exceptional twist at the end.  I was completely absorbed by A.V. Laider's tale of murder, only to be left dumbfounded by the end.  He drew me into the mysterious world of A.V. Laider with ease. I was curious or should I say I was damn nosy and needed to know the truth.

The story has an almost comical appeal to it, where the odd snigger surfaced within the first few pages.  Definitely worth a read. You might not like it at first, but it will definitely grow on you.

Email ThisBlogThis!Share to TwitterShare to FacebookShare to Pinterest
Labels: Tale of mystery