The Big Break with Katherine Langrish

On the Big Break feature today we have the wonderful Katherine Langrish who has just released West Of the Moon with Harper Collins this month.

Many thanks to Vivienne for inviting me to her blog. I’m a British YA fantasy writer, and my books so far have all been historical fantasies – a trilogy, ‘West of the Moon’, set in the Viking Age, and a stand-alone novel called ‘Dark Angels’ (‘The Shadow Hunt’ in the US), set in medieval Britain at the time of Richard the Lionheart. I love folklore and legends, many of which have found their way into my work – and I blog about them too, at Seven Miles of Steel Thistles.
What was your first reaction when you found out that your first book was to be published? How did it make you feel?

I was totally thrilled. In fact, the thrills kept on coming! I’d been sending my manuscript out for so long, and had at least 12 rejections. The first moment of excitement was when a professional reader told me she thought it was good. This was Liz Kessler, now a best-selling children’s author in her own right. She helped me to find my agent, Catherine Clarke – another wonderfully exciting moment. Catherine was immensely helpful and gave me brilliant advice on revising and partly rewriting my ms, and then, when she sent it out, no less than eight publishers offered for it, and the book went to auction.

What were you doing when you found out? Who did you tell first?


I was on my own when I first heard that at least one publisher wanted the book, and I tried to phone my husband and then my mother, but they weren’t available, and my children were at school. I couldn’t get hold of anyone in my entire family! I was bursting to tell someone, so I drove into town, went to the library, and asked the librarian, “Can I tell you something exciting? I’m getting a book published!” She was completely lovely – delighted for me, and has asked about my work ever since.

Then, when I found out that several publishers were interested, I made several visits to meet some of them. At last, there was the excitement of the auction, with my agent calling me at home to keep me informed as the bids rose. My mother came round, and we nervously drank cup after cup of tea as I tried to convince myself this was all really happening! (Looking back on it now, I wonder we didn’t hit the brandy!)

How long did it take for your book to be published after you had been told?
Quite a long time – about 18 months.


What was happening to your manuscript during this time?

Not only was there – as there always is – plenty more editing – line edits, copy edits – but also the design, the book’s cover, and the whole sales and marketing campaign to be organised by my publisher, Harper Collins. It all takes a lot of time. I wasn’t involved in the cover art decisions, or the marketing campaign – authors rarely are – but the editing was a long process. Also, as they wanted a sequel, I had to begin thinking of that, so there was plenty to keep me occupied.

It was a dream come true. Something I’d wanted since I was ten years old and had sometimes begun to think would never happen. Marvellous!


Where was the first place that you saw your book on sale, and did you do anything crazy when you saw it?

Actually, I didn’t do anything crazy – it was a little in advance of the official publication day, but ARC’s were on sale at the Federation of Children’s Book Groups’ annual convention in Birmingham, in spring 2004. I knew I had to make a speech in a short while, and I was so terrified, I probably hadn’t got room for any other emotion! But I do remember Celia Rees coming by, buying a copy of my book, and asking me to sign it for her. Celia Rees! I was dumbstruck – and star-struck. It was just like Celia, to be so kind.

My work-in-progress is a young adult fantasy, with more than a dash of science fiction, set in London about 300 years into the future – so a new departure for me. I don’t want to say too much about it, yet, but it involves parallel universes, so I’m currently reading a lot of books about string theory and particle physics – but there’ll be folklore elements too. I’m very excited about it, but it’ll take me at least a year more to write.


Being an established author, do you still get the same thrill when you see a new book released?

Oh yes! I don’t think that thrill will ever die. At the moment I’m feeling that way about the wonderful new edition of my Viking trilogy. All three ‘Troll’ titles in one volume! I love its beautiful cover, with my young hero standing poised in wreaths of icy mist!


What advice would you give unpublished authors?


My first piece of advice would be to read as much as you can in the genre you want to work in. You know: if you want to write fantasy, read plenty of contemporary authors: if you want to try a gritty realistic thriller, the same advice… That way, you’ll get a feel for what publishers want, and how professional authors handle plot, character and dialogue.

Second, join a writing group, for feedback. Or, if you can afford to, send your ms to a reputable literary consultancy which will offer you professional advice. (You’ll find them in the Writers and Artists Year Book, which can be consulted in any public library – assuming they haven’t all been closed down). You’ll have to pay for a critique, but it really will be worth it. Much better to do so, than to waste your time sending out an ms which more than probably has not yet reached its – and your – full potential. (I tried both ways, so I know this advice is good.)

Third – don’t despair, don’t give up. Most if not all published writers have been where you are now. Some of us have taken years learning the trade (and we keep on learning.) It’s not easy – but it is wonderfully worthwhile. Keep trying!

On behalf of all of my readers, I would like to say thank you Katherine for sharing your big break with us.  I loved learning about the auction and I was pleased to hear that Liz Kessler had a part in your books being published. 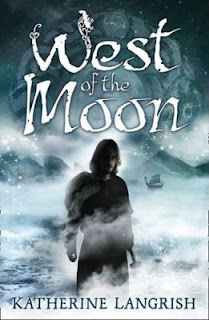 West Of the Moon is available to buy from all leading booksellers. Come back tomorrow to read my review of the book.

Email ThisBlogThis!Share to TwitterShare to FacebookShare to Pinterest
Labels: the big break