The Big Break with Amy Plum

The Big Break is very excited to have Amy Plum on the blog today. Amy is  the  lovely author responsible for my recent book lusting over her debut YA novel Die For Me which I will be reviewing tomorrow. 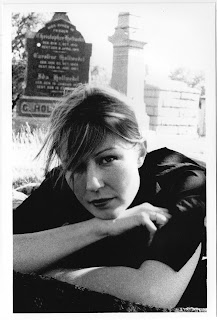 Hi Amy, thanks for joining me on the blog today to answer questions about your Big Break.

What career did you have before you began writing for a living?

I have had so many jobs in my lifetime...I tried to count them the other day and there were more than 30. But if we’re not talking babysitting and fast-food shovelling as a teenager, my “serious” jobs were in the art world in New York (I worked at Sotheby’s, managed an art and antiques company, and then bought and sold 19th/20th century paintings); as a French-to-English translator; and as an English professor at a French university.

How long did it take you to write your debut novel 'Die For Me'?

I wrote it during my university’s summer break. So the first draft took about three months, and then I took another month or two to tweak it.

What was your first reaction when you found out that  ‘Die For Me’ was to be published?


Here’s the story: A week after my agent sent the manuscript to publishers, I got a two-book offer from a top publishing house, who proposed a very nice advance. The next day at the university, I could barely breathe. I felt like I was floating from class to class, and even the most obnoxious students couldn’t phase me.

That night I got home to find an email from my agent asking me to call her. She asked if I was sitting down. And then she told me that HarperCollins (THE HarperCollins!) was offering several times the other publisher’s offer for a three-book deal. They promised to make me one of their top promotions, and gave me a marketing proposal that seemed to include everything short of going on Oprah. They were PSYCHED. And, since it was a pre-empt, I had 24 hours to accept their offer.

I took a moment after hanging up to look at my bookcase. Charlotte’s Web. Where the Wild Things Are. To Kill A Mockingbird. All Harper books. And my book was going to be on their list. I thought my head was going to explode.

Then I walked into the kitchen, where my husband was trying to keep the kids from disturbing my phone meeting. He looked up from his coloring book and said, “Well?”

He, like me, had been over the moon about the first offer. So when I told him what the new offer was, his eyes just got really big. “Why?” he asked. (As in why would anyone offer that kind of deal for the book we had no clue would work.) “I have no idea,” I said. And then I lost it and started screaming and jumping around the room.

After Laurent, I told my best friend Kim. She had been following the proceedings with the other publisher from the day before, and was in the kitchen at her café/catering business outside Chicago. She screamed, “NOOOOO!” and then started laughing her head off in glee. From the sounds of it, her kitchen staff started having a party right there on the spot.

How long did it take for your book to reach publication after the initial agreement?

I accepted the offer the day before Thanksgiving, 2009. I remember that because my editor was flying off for the holidays, and my agent got our response to her while she was in the airport.
And the book will be published by HarperTeen on May 10, 2011. (In the UK, where you are, Atom’s release date is May 5, 2011.) So that’s almost exactly a year and a half.

Nothing could happen to the manuscript until the contract was signed. And that didn’t happen until mid-January. My editor warned me from the start that she prefers two rounds of changes rather than the usual one round. So I got my first editorial letter in February and spent a month rewriting. I got the second editorial letter about six weeks later in April and spent three weeks rewriting for final draft. That brought me to mid-May.

In August I received the copy edited version of the manuscript marked up with several people’s notes. I had a week to go through that note-by-note and accept or reject changes and answer questions. And after that, the book went to print for the galley copies.

So all-in-all it was a case of rush-rush-rush and waaaaaait. Then rush-rush again before another wait. Now that I’m getting a feel for how much time things take, though, I’m learning to work on other projects in the interim periods. Like doing this interview while I wait for my editorial letter on Book 2!

How have you kept yourself occupied as you wait for publication day?

Besides the writing of Book 2, I have been working hard setting up all of the social networking activities that we YA authors are expected to do nowadays. My amyplumbooks.com website took quite a while, and I’ve been writing for my blog, and keeping people updated on happenings on Facebook and Twitter. I set up pages on Goodreads, Library Thing and my Amazon page.
And for the past month or so I have done over forty interviews and guest blogs.
In my spare time I have also been working on working on another project that I hope will someday see the light of day!


The cover of your book is amazing. How did you feel when you saw it first?

Bowled over. Kate’s pose overlooking Paris from the rooftops is the perfect mix of whimsy and solitude, whereas the color of the sky seems to swing between a historical-looking sepia and the vivid hues of a sunrise. I read in it isolation, hope and longing.

How will you celebrate on publication day?

Before publication day, I am hoping to shoot a homemade video in Paris that I can release ON publication day so that all of my online readers can celebrate with me. I haven’t actually planned for the actual day of publication. I will probably either be hiding in my closet or down the road at the local café drinking some celebratory champagne with my husband.

How does it feel to have people talk to you as an author? How do you deal with the deranged book obsessed fans that I know you already have? (TEE HEE!)

I love it. I had a blog before writing DIE FOR ME, and was used to chatting daily with people I had never met. I already had a very strong support-base with the stories I was writing for that blog (which were not YA). But even so, the attention I’ve been getting from this new fan base is really blowing me away. (In a good way!)

Tell us what a typical writing day would be like?

When I’m not on a killer deadline, I try to write 4 hours per day, usually in the morning, with a goal of 2000-2500 words. If my deadline is really tight, I try for more than that, plus rereading and revising what I wrote from the day before. And when I’m under a head-exploding deadline I go away for 3-5 days and write day and night.
I always take an hour to speed-walk or jog in the middle of the writing. It’s good to take a break and the exercise gets the brain cells hopping about. I usually wait until I’m stuck on something before slipping my headphones on and dashing out the door, and the quandary almost always works itself out while I’m walking.

What advice would you give to aspiring and unpublished authors?

My first book is unpublished. It was a fictionalized memoir of my first year living in the French countryside. When that didn’t sell, I decided to try my hand in another genre. Which is when I started DIE FOR ME. If that hadn’t worked, I was going to do a psychological thriller, verging on horror (which I still want to do some day).
Once I decided I wanted to give writing a good, honest try, I really threw myself at it head-first. I think you have to be determined and unrelenting. Don’t let rejection stop you. Learn from the critiques you are given and if one thing doesn’t succeed, don’t give up or get stuck on perfecting an idea that isn’t working: try something else.

Thank you ever so much Amy for joining me today. Die For Me goes on sale next week and I can honestly say the book is as good as its cover. Go pre-order it now!
If you would like to know more about Amy Plum and her debut book then please click here. 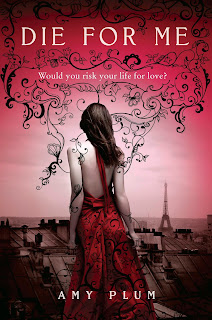