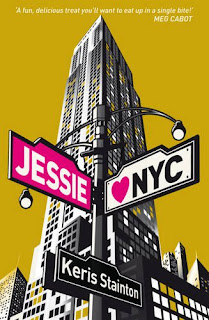 To be published in July 2011 by Orchard Books

The book kindly sent to me by the  author for a honest review.

As the flight attendant walked down the aisle, checking everyone had their seat belts fastened, Jessie felt butterflies rise in her stomach. She'd been taking the piss out of Emma all day, but she couldn't believe they were getting to spend the summer in New York either. She'd been dreaming about it for so long and now it was going to happen. And it was going to be better than she'd imagined because Emma was going with her. She smiled at Emma who was hopping up and down in her seat with excitement. They were going to have an amazing time. And whatever happened, at least there was no risk of bumping into Taylor.


Jessie is about to embark on the trip of a lifetime. She is spending the whole of the summer in New York with her best friend Emma, at her mum's cool apartment. She is hoping the trip will help her to get over her previous disastrous relationship. Finn, a New York hottie, is having a difficult time dealing with the fact that he is in love with his best friend's girlfriend. This book tells the story of what happens when two people from two different lifestyles let fate bring them together.

From the first couple of pages, I was tingling with excitement. Jessie is living my ultimate dream.  I can remember being  the same age and desperate to go to New York. Alas it was not to be and I have still to find my way there, however through Keris Stainton's book I found that I could vicariously through Jessie's life. Jessie is the first character in a book that I have actually wanted to be; everything about Jessie just reminded me of myself at that age.

The book is peppered with references of American films and TV shows which fed my American addiction as a teenager and I found myself reading the whole book in one sitting, completely lost in a world where my biggest worry used to be whether I would pass my O levels or not.

One of the main themes within the book is fate. How chance meetings can change the future. I am a strong believer in fate and coincidences, so each time Finn and Jessie's pathways crossed, I felt instantly happy. Their new found friendship is completely serendipitous!

The book also looks closely at relationships, especially between Jessie and her mum.  To begin with Jessie's relationship with her mother Natalie, is very distant and I found myself disliking Natalie's manner. However, when they began to open up their feelings to each other, I realised that Natalie was never intentionally trying to upset Jessie; they just seemed to have a lot of crossed wires that needed to be undone.

I loved the way the chapters alternated between the viewpoints of Jessie and Finn. The author's writing gave both characters a distinct and unique voice.  Finn is rather tasty and you become desperate for Jessie to finally   kiss the gorgeous boy.  A timeless dream of most English girls regardless of age: to actually get the good looking American guy!

This book will appeal to all ages, and I would highly recommend it to 40 something women like myself who grew up on American sitcoms and movies and have still to fulfill their American dream.

I would love to see Richard Curtis make this book into a film, as I feel it has the flavour of some of his wonderfully British movies such as Notting Hill and Love Actually. Anyone have his email address????
On speaking to the author, Keris has stated that she would prefer Nora Ephron to produce the film as a book and I had to ask her who she was. Shocking I know! As I grew up on her films such as Sleepless in Seattle and You've Got Mail too. Sigh!

I know there was a discussion on Twitter about certain mild swear words being used within the book, but to be honest, I didn't notice them at all. In fact, I must have been wearing blinkers to them as I read, because I couldn't tell you where they were within the story.

This book is utterly fabulous and I am so glad I had the opportunity to read it. I think this is a lovely, refreshing romantic summer read that needs to be read on a sun lounger by pool, with a cocktail in one hand.
at April 21, 2011