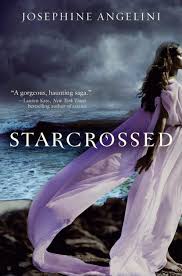 Published by HarperTeen, an imprint of HarperCollins on 31st May 2011

Helen Hamilton groaned softly to herself and looked out over the railing of the ferry that was bringing her back to Nantucket. She contemplated another year of riding her bike to school in November and, when the snow got too deep, scrounging for rides or, worst of all, taking the bus. She shivered in anticipated agony and tried not to think about it. Some of the Labour Day tourists were staring at her, not unusual, so Helen tried to turn her face away as subtly as she could. When Helen looked in the mirror all she saw were the basic - two eyes, a nose, and a mouth - but strangers from off island tended to stare,which was really annoying.


Alongside Die For Me by Amy Plum, this has got to be one of the most anticipated YA books of the year and quite frankly I can see why. This is most definitely a page turning, sleepless night kind of book that I personally struggled to put down. The best way to describe this book is as a mythical modern day Romeo and Juliet, where everything that can be done to keep the starcrossed lovers apart is tried and tested yet fails abysmally.

Helen comes across as a rather clumsy character to begin with, but you soon realise that it is because she isn't really like any other normal human being and has yet to discover her full potential. When the Delos family arrive in her hometown, something takes over Helen and on her first encounter with Lucas Delos, she tries to kill him. I kid you not! Every time their paths cross they are both desperate with murderous intentions. It is only when their hatred turns to desire that Helen discovers she is rather different from any other normal teenager. She is a Scion, just like Lucas and the rest of his family; she is a descendant from the Greek Gods and her family has been at war with the Delos family for centuries. Lucas helps Helen to learn how to use her extraordinary powers, whilst trying to ignore his strong feelings for her which would rip his family apart.

Josephine Angelini has created a real diamond of a book. Her story is mindblowingly original and I loved every word of it. I loved the use of Greek mythology within this book and  I definitely feel that it could become one of my favourite genres.

As soon as the Delos family arrive in the book, I found myself being sucked into the story. The build up to their arrival had me intrigued and curious to meet them.  I didn't like Helen to begin with, I don't know why I just found her annoying. However as soon as the sparks flew between her and Lucas, she seriously went up in my estimations. The heat of the romance between Lucas and Helen had me reaching for an electric fan to cool the room temperature down. Lucas, I loved from Helen's first attempt to kill him. He is everything you want in a lead male character; gorgeous, lustful yet gentlemanly as well as having a few cool super powers nicely thrown in. I loved the furious hostility between Helen and Lucas to begin with. Their utter hate for each other really brought the story alive and then the author goes and turns this hatred on its head, to create instant lusting.  Helen and Lucas are surrounded by a cast of beautifully written characters, who I wanted to get to know individually. There are other romances blossoming amongst the Delos family and their new found Nantucket friends,which I can't wait to see blossom in the next book.

The plot line was fast and furious; the whole idea behind the book was breathtaking and when I came to the end I felt like I had just experienced my first bungee jump. Josephine Angelini writes like a professional  boxer fights, and doesn't stop punching you with her plot twists and turns until the very end, where she pushes you off the cliff alongside her cliff hanger ending!

All I can say to Josephine Angelini is 'Welcome to the YA paranormal genre, may your journey through it be a long and prosperous one'.
at April 28, 2011