My Sister Lives On The Mantelpiece by Annabel Pitcher 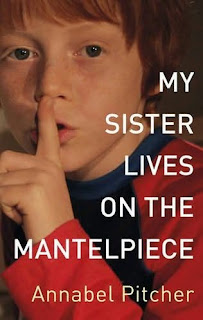 Book kindly sent to me by the publisher

My sister Rose lives on the mantelpiece. Well, some of her does. Three of her fingers, her right elbow and her kneecap are buried in a graveyard in London. Mum and Dad had a big argument when the police found ten bits of her body. Mum wanted a grave that she could visit. Dad wanted a cremation and to sprinkle the ashes in the sea. That's what Jasmine told me anyway. She remembers more than I do. She was Rose's twin.


It is five years after the bombing that killed his sister Rose and Jamie's family are still trying to repair the unrepairable damage the event caused. His parents have separated, leaving Jamie and his sister living with their Dad, who now suffers with a severe drinking problem and often needs his children to look after him.Their mum has deserted them and doesn't seem keen to keep in contact at all. Jamie struggles to come to terms with the devastation his family continues to suffer, over a person that he barely remembers.

This book is real. Real life,raw and gritty, not sugar coated to make it easier to digest. Real tragedy that could easily reflect the aftermath on a family after losing someone in a terrorist attack. This book will really stir up your emotions, leaving you crying your eyes out by the end. In fact, this book should have a warning label on it, advising it not be read in public, due to excessive waterworks.

This book is written through Jamie's eyes and straight away you realise he needs your undivided attention because no one else in his life is giving it too him. He is too young to remember much about his sister Rose, yet he stands by on a daily basis and watches how her death destroys his parents, to the point where his mother can no longer live with them and his father barely remembers he has other children, as he staggers daily from one drink to the next. As you read, you have this desperate need to call social services yourself  to rectify the unhappy situation and bring happiness into his life. On top of all of that, not only does Jamie suffer at home, but also at school, where instantly he is labelled as different and picked on for being the new boy. He has no where to go to find peace.

As a mother, I struggled to feel anything but contempt for Jamie's mother, who completely abandoned her children to a drunk. I can understand that she reached a point where she could no longer live with her past, but to leave her children that way is just difficult to swallow.

Jasmine, his older sister is a very strong character; after losing her twin sister, she appears determined not to lose any other members of her family and steps into her mother's shoes to help Jamie survive.

The friendship between Sunya and Jamie has a Shakespearean quality to it as you envisage the forbidden budding romance of Romeo and Juliet. Jamie has a better understanding of the world than his father and he can clearly see that just because Sunya is a Muslim, it does not mean she is responsible for the death of his sister.

This book is eloquently written, pulling at your heart strings with every page as you watch from the sidelines; a grieving family, struggling to re identify their positions in the family structure and the world around them. Each family member coping in their own way with their loss. Jamie comes across just like every other ten year old I know, only with much more emotional baggage than most.

This is a book that should be read by adults as well as children. Just be prepared for your emotions to take a battering.

For a debut novel, this is exceptional, leaving me in no doubt that Annabel Pitcher is an author who will be around for a very  long time.

Come back tomorrow to read about how Annabel Pitcher got her Big Break in publishing.
at May 09, 2011