As you know, I haven't written one of these posts for quite some time. Unfortunately I have been very busy writing and I found that these posts took a lot of my time and I needed to focus more on finishing my own work. There was a discussion on Twitter about opening up this post to other bloggers to have a go and Elle from The Book Memoirs  was extremely excited and asked if she could go first. Who was I to refuse? And let me tell you what a wonderful treat you are in for.
So, I shall pass the Life As We Know It baton over to Elle who has a bit of a stationary issue!

The first time I realised that I might have a slight problem with stationary was a rather singular moment wherein I found myself standing in WHSmith – a UK newsagent and stockist of stationary – painstakingly counting out what I can only honestly describe as the "smush" at the bottom of my purse in order to buy a 99p plastic pen which I knew from experience would run out after a week of only occasional use. I was vaguely aware of considering the notion that spending 15 minutes clutching my plastic prize while sorting through the traditionally useless change in my hand might be a disproportionate amount of effort for a 99p entirely unreliable so-called writing implement but the sense of determined triumph when I walked out of the door with a paid for "pretty" overrode any notions of sensibility I might have had at the time.
I have a theory that the practice of being a bibliophile is not, in fact, a practice at all but a compulsion which forces us on in a desperate need to collect stories which, in turn, illuminate our shadowy little self-contained lives in some way. It is not a hobby for people who really read, who say without fail that they read every day and won't leave the house without a book, it is a way of life and a way of processing that eventually leads to a deeper understanding of self. Thankfully, in the process of collecting stories, we are able to also collect these beautifully bound pages of neatly printed paper which slowly fade and then let go of The Library Smell. The one that forces you to close your eyes and breathe in manila-coloured pages. The one that makes your friends wander off and proclaim, "They're not with me!"
So, when you get right down to it, it isn't so shocking that so many bibliophiles are obsessive hoarders of stationary. After all, books originated with parchment and quill, paper and pen, early ink press with heavy black letter stamps. It makes sense that the two so-called hobbies should be such close cousins. I – HEY. That's not on. Don't look at the screen with such derision because I can see you. I can see that pile of overly expensive and completely empty journals behind you, hidden in a box under the bed, poking out of drawers, lovingly displayed for their prettiness on your bookshelves along with your other shinies. I know that they're all empty because how could you ever bring yourself to deface your pretties? What if you write something in them that you want to throw out? What if, god forbid, your handwriting is atrocious and you can no longer look upon those delicious cardboard pages with innocent delight because you know that you have ruined it. 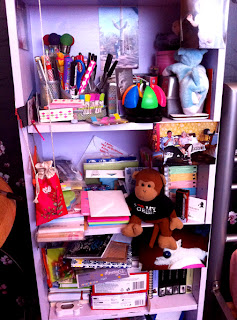 And while I'm at it, don't pretend that you don't feel the same as me about ripping open a new pack of Post-It brand notes and smelling the sweet adhesive smell from the sticky tack strip on the back. Don't for one moment convince yourself that you're fooling anyone when you close the drawer on the completely unnecessary purchase of pink staplers, green, purple and gold gel pens that are of no practical use to man nor dog, and paperclips that you'll never use because all of your paper is bound up in gorgeous $3.99 ringbinders from Target or adorable print lever-arch files that cost £4.98 in Asda! Because I, fellow addicts, do not believe you. And neither does anyone else.
So I'll be the brave one. I'll stand up and say that I have a perfectly serviceable and shoulder-high bookshelf which contains not books but notecards and notepaper and magnet-pads and pencil-tidies and hole punches and highlighters of all different brands and shapes and sizes and stickers and bull-clips which are stripey and spotty and contained within a baby pink tin with a fiercely die-for-me cutesy kitten guarding the lid. I will admit that I have quills made of real feathers and bright luminescent fake feathers and that they adorn my desk and my bookshelves with unashamed perfection. I will admit that I have four bins under my bed full of craft paper, poly-pocket plastic sheaths of silky smoothness for lever-arch files, photograph printing paper, folder dividers, labels, notebooks of printed plastic which I take out occasionally and marvel at. 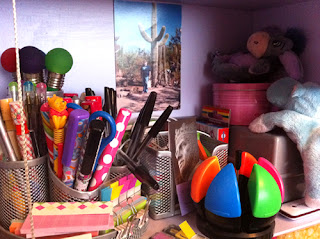 I will admit that I fully get the joke of http://smellofbooks.com/ but that I'm sad that there is no smellofstationary.com esque rainbows when we got back to her apartment.
My name is Elle and I am a stationary addict.
I dare you to deny the truth any longer.
Fabulous! Thank you so much Elle for providing us with such a wonderful post. If you would like to read more from Elle then pop over to The Book Memoirs where you will find her and her transatlantic buddy Kate.
at July 23, 2011

Email ThisBlogThis!Share to TwitterShare to FacebookShare to Pinterest
Labels: life as we know it, the book memoirs