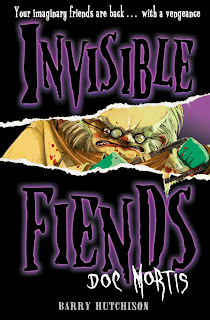 I am extremely excited tobe hosting the second stop on the Doc Mortis blog tour. I read this book on the weekend and loved it. The review will follow later today. The blog tour began yesterday with the first extract from an exclusive short story written just for the blog tour by Barry Hutchison. The story is called 'The Rise of Doc Mortis'. If you missed the first extract, then quickly hop over to Darren's brilliant blog  Bookzone for Boys.

I will now leave you in peace to read the second extract from 'The Rise of Doc Mortis.' by Barry Hutchison.

In the dark, Doc traced his fingers along the high back of the oak chair. It was still there, but the man who had been sitting in it was gone.
He reached a hand into the pocket of his tweed coat, took out a metal-cased lighter and clip-clip-clipped the wheel until a flame spluttered to life. It cast a dancing glow across the execution room, sweeping the darkness into the corners.
The chair was definitely empty. The leather straps were still buckled in place, but the condemned himself was nowhere to be seen. Doc lifted the lighter higher and raised his eyes. The glass screen, which had just moments ago separated the good from the evil, lay broken on the floor. In the space where the witnesses had stood, there was only more darkness.
‘Interesting,’ Doc said. He turned slowly on the spot, letting the light lick across the walls. A haphazard pattern of bloody handprints was smeared across the ruined paintwork. High up, just a little below the ceiling, someone had scrawled “HELP ME” in crimson.
Doc raised onto his tiptoes, stretching up to his full height. He pressed his fingers against the second “E”. The long-dried blood crumbled away at his touch. He sniffed the red dust on his fingertips, then touched it to his tongue.
‘Very interesting,’ he said, quietly.
The shadows grew longer as the flame flickered, then died. Doc cursed below his breath and gave the lighter a shake. The flint wheel rasped as his thumb flicked down, but only sparks emerged from the top of the lighter.
He shook it again, listening to the fuel slosh around inside the plastic casing. He was about to try lighting it again when he heard a noise in the darkness. A low breathing; deep, but unsteady, like a lion at the end of a long hunt.
Gripping his leather bag in one hand, Doc turned in the direction of the sound. He raised the other hand and gave the lighter one last go.
The flame’s orange glow lit up the disfigured face of something monstrous that lurked at the edge of the room. Its teeth appeared to have been inserted at random into its wide mouth. They jutted in opposite directions, pressing against one another in places, growing right through the creature’s lips in others. They were pointed, deadly sharp, stained with the blood of a thousand unwilling dinners.
A rusted strip of metal covered the area where its nose should have been. Four bolts attached the plate to the face – two above the mouth, two below the monster’s dark, narrow eyes.
The thing was naked, aside from a ragged loincloth strapped around its waist. Coarse, black hair covered its torso, from its grotesquely bulging stomach, to the enormous knuckles which rested on the floor.
Doc looked the figure up and down. Even hunched, as it was, it stood almost a metre taller than he did. Muscles stood out like ropes across its half-naked body. The near-black eyes looked down at the little man, hungrily.
‘Very interesting indeed,’ Doc muttered. He took a step back as the monster’s teeth gnashed and a sound like the last gasp of a drowning man emerged from its throat.
‘You gonna have-ta forgive my friend, Bubba, there,’ drawled a voice from the shadows. Doc turned to see a tall, spindly figure step into the circle of light. ‘He ain’t so good with the talkin’.’
Doc studied the newcomer. He had a crooked, wide-brimmed hat pulled down low on his head, but Doc could make out that he was wearing a sackcloth mask, with a mouldy carrot attached for a nose.
Dirty strands of straw poked out from beneath the sack, and from the sleeves of the long, striped shirt the scarecrow wore beneath a tatty pair of dungarees.
‘And what are you supposed to be?’ Doc asked.
The scarecrow hissed out a laugh. SS-SS-SS-SS. ‘Boy, I’m every bad dream what you ever had! I’m the monster what lurks under yo’ bed. I’m the thing what goes bump in the night and makes you holla for yo’ momma.’
Doc smiled and gave a single shake of his head. ‘No. I do not think that you are,’ he said. Then he tossed the lighter and listened to the scarecrow’s screams.
‘Git him, Bubba! D-don’t just stand there, git him!’ the straw man howled, as his left arm burst into flame. He writhed and twisted, frantically, smashing the limb against the walls, trying to beat the fire out.
Bubba moved noisily. Even over the scarecrow’s screams, Doc heard his lumbering footsteps. Mortis spun, flicking his wrist as he turned. A scalpel slid down from within his sleeve. His pudgy fingers tightened around the handle as Bubba’s slab-like hands grabbed for him.
Doc ducked, turned, dropped to one knee as Bubba stumbled right past him. He slashed out with the scalpel and shivered with excitement as the blade sliced through the back of one of Bubba’s bare feet, just above the heel.

‘Achilles tendon,’ Doc explained. He slid the blood-spattered scalpel back up into his sleeve. ‘It hurts, yes?’
He looked up as the room grew brighter. The scarecrow had managed to extinguish his burning arm, but the tattered green curtains were now ablaze, the flames already licking the tinder-dry ceiling.
‘Kill you,’ the straw man hissed. ‘I’m gonna kill you, boy!’
‘You can try,’ Doc said, stepping over the fallen Bubba and making his way towards the door. ‘But your friend here will not escape this place on his own. You can forget me and save him, or you can pursue me and let him die. The choice is yours.’
With a single nod of his head, Doc left the burning room, taking his briefcase with him. He kept walking, not looking back, making his way through the darkened corridors using memory alone.
At last, he came to the front door of the building. It hung from one hinge, half-blocking the exit. With a grunt of effort, Doc pushed it aside and stepped out onto a path overgrown with weeds.
The world was in near-darkness, with only the full moon casting any light. In the silvery shadows, Doc heard the velvet rustle of oily wings. As his eyes adjusted to the gloom he saw them – birds. Crows.
Hundreds of them.
They were perched on the roof of the building he’d emerged from. They stood on the wreckage of burned out cars. They hopped across the pock-marked tarmac, their beady eyes fixed on his.
‘I see you found my babies, boy,’ cackled a voice in the corridor behind Doc Mortis. He didn’t bother to look at the scarecrow as he slithered up behind him.
‘So, you chose coming after me over saving your friend?’ Doc said. There was a note of approval in his voice.
‘Fact is, I never really liked him anyhow,’ the straw man said, and there was that laugh again. SS-SS-SS-SS.
Doc let the scalpel slip down into his hand once again. Only then did he turn to look at the figure beside him. ‘I would like to know, what manner of creature are you?’
‘Well now, that’s right, I never did introduce myself. Where’s my manners?’ the straw man said. The slit in the mask where his mouth should’ve been spread into a grin, revealing rotten stumps of teeth, and Doc realised it wasn’t a mask at all. ‘They call me the Crowmaster. Take a good hard look, boy,’ he spat. ‘Because this here is the last face yo’ ever gonna see!’
Screeching with laughter, the Crowmaster stepped back and raised his arms, and the night was filled by a tornado of feathery black. 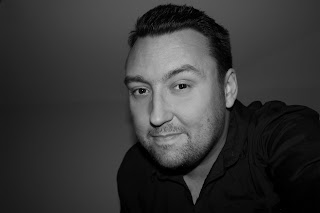 For the third extract to this short story, hop over to the lovely Sarah's blog 'Feeling Fictional'. Also pop back at 3pm for my review of  Doc Mortis.
at August 02, 2011