Struts and Frets by Jon Skovron 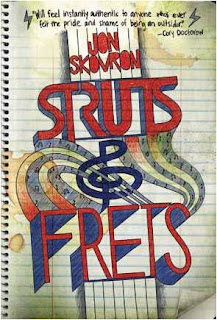 Published by Abrams and Chronicle on September 1st 2011
Book sent by publisher for an honest review.

Our band was called Tragedy of Reason. Or Tragedy of Wisdom. We hadn't decided yet. I liked 'Reason' because it said how much it sucked to be the only thoughtful person in a crazy world. But our frontman, Joe, liked 'Wisdom' because he said:
'It just sounds cooler!'

Goodreads Summary
Told in a voice that’s honest, urgent, and hilarious, Struts & Frets will resonate not only with teenage musicians but with anyone who ever sat up all night listening to a favorite album, wondering if they’d ever find their place in the world.

Music is in Sammy’s blood. His grandfather was a jazz musician, and Sammy’s indie rock band could be huge one day—if they don’t self-destruct first. Winning the upcoming Battle of the Bands would justify all the band’s compromises and reassure Sammy that his life’s dream could become a reality. But practices are hard to schedule when Sammy’s grandfather is sick and getting worse, his mother is too busy to help either of them, and his best friend may want to be his girlfriend.

When everything in Sammy’s life seems to be headed for major catastrophe, will his music be enough to keep him together?

***********
Every time I thought about reviewing Struts and Frets, I was reminded of my initial response to the first couple of chapters. I was convinced that this book featured a group of hormonal teenagers who were milder in their tone than the Inbetweeners but still had their attitude. Imagine placing this bunch of teenagers at  a High School Musical party which they are about to gatecrash! Get the picture?
For the first half of the book, this was the way I viewed it. The story line was entertaining as Sammy and the rest of his band, Tragedy of Reason, struggled with school, the band and relationships with girls. Sammy was a nice guy; one you would be happy to take home to meet your mum after a couple of dates. A couple of the other band members, you probably would never introduce to another family member, but Sammy was a safe bet.
As the book moved into the second half of the story, it all became more serious and it began to tug a little on my heart strings. Sammy and his mother struggle to come to terms with the deterioration of his grandad. Although it is never mentioned, it appears that he is suffering from Alzheimer's and becomes a danger not only to himself, but also to his loved ones. That is a big issues for a teenager to deal with and I think Sammy has a sudden maturity growth spurt through out this situation. He finally realises what is important to him and what he wants to achieve in life.
This book tackles homosexuality extremely well. Sammy's best friend, Rick, is just coming to terms with telling people about his sexuality and we watch as all his friends learn to deal with the situation in their own way. The majority of them seemed to know before he did and dealt with it with maturity and grace. Others seem to want to 'out' him in public, which is step he wasn't quite ready to take, however when it happens it makes life a lot easier for him, as he can be himself. With all the issues concerning gay and lesbian characters in YA at the moment, it was lovely to read it handled so beautifully. It is definitely a subject that should be increased with the YA market, as at that age, a lot of teenagers are still coming to terms with their sexuality.
The book watches the progression of the relationship between Sammy and his mother as she learns to accept his musical abilities and dreams. For many years, she tied her thoughts and emotions with her past experiences with her parents and could not see past their troubles to envisage Sammy as a separate entity. Once she breaks the connection, she is able to see Sammy for whom he really is and believe in his musical abilities.
For me there was a bit of geeky moment in the book, as Sammy's grandmother was named Viv! My name so rarely comes up in a book,that I always get over excited on the rare occasion it does.
Even though this book is about loud music, it is a quiet story. It develops at a steady pace, as we watch these teenagers deal with the pressures put upon them and learn to cope.  A coming of age story that will remind you of your own school days in one way of another. This book will also prove to you that dreams really do come true, as along as you give them 110% of your time!
A thoroughly entertaining and enjoyable read that left me wanting more from Jon Skovron.
at September 27, 2011