The Big Break with Phil Earle

Phil Earle is definitely one of the reasons why I love Twitter. If I hadn't been on Twitter, I would never have found out about his brilliant book 'Being Billy' which I reviewed yesterday. He is really lovely to talk to and I was really pleased when he agreed to come on the blog to talk about his Big Break. 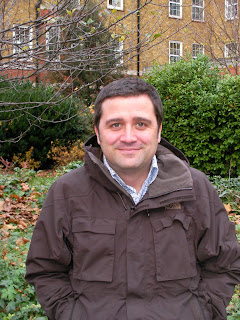 Firstly, can I thank you for joining me today on my blog.
Hi Viv. Absolute pleasure, thanks for inviting me on...

As a member of the Simon and Schuster team, did this have any impact on your decision to write a book?
I’ve been writing, on and off, for ten years now, long before I worked at S&S, or Random House before that.
My decision to start writing dates back to working as a bookseller for Ottakar’s. After six months of shelving sci-fi/fantasy and Erotica, I was thrown into the kids section, mainly because no-one else wanted to do it.
I’d been a reader before that, had studied English and Drama at University, but had never found a genre, other than graphic novels, that fired my imagination. All of a sudden I was reading David Almond’s ‘Skellig’, and SE Hinton’s ‘The Outsiders’, and that was it. I was completely smitten. I’ve read little else but kids fiction since.
In terms of writing, I decided to give it a whirl after Celia Rees came in to talk to kids in the shop. She spoke with such passion, that I was inspired to give it a whirl. I spent the next three years writing most lunch hours on a battered old laptop in the basement of the shop.

You must have witnessed an increase in YA manuscripts entering the S&S offices, did you wonder whether the market had reached saturation point and whether there would be room for your book?
We certainly saw a huge increase in paranormal romance (or Fang-Bang(!), as we ended up calling it) and then in dystopian fiction, but not really an increase in contemporary, gritty YA. It’s always been difficult to sell books like mine in big numbers, although there are exceptions like ‘Before I Die’. What’s important with this genre, I think, is the quality of the characters ‘voice’. I feel so ridiculously lucky, that despite the difficulty of the subject matter, I found an editor who fell in love with Billy.

How long did it take you to write your debut novel ‘Being Billy’?
I started in January 2009. We’d just had out second baby, and were unbelieveably tired and grumpy. After finally getting both kids to bed, we’d collapse in front of the telly with a bottle of wine and a box set of ‘24’. Three series and a vineyard in, I realised my head was turning to mush, so decided to start writing again, basically between 8 and 9pm every night.
It took me four months to clobber the first draft, and by the August of that year, I had a two book deal with Puffin. Looking back, I realise how unbelievably jammy I’ve been.

Where did you get the idea for the book?
It had been in my head since the mid 1990’s when I worked in children’s homes. The kids were angry and violent, but when you dug away at what they’d seen, the unforgiveable things that had been inflicted on them, you started to understand why they acted as they did. You started to realise just how resilient, and insightful, and unbelievably special they were. I wanted to try and understand how they felt to be abandoned, how they saw the world when by the age of ten, they’d been resigned by many, to the scrapheap. Most importantly though, I wanted to paint them accurately, truthfully.

‘Being Billy’ is a rather gritty, heartbreaking, contemporary read, did you have to do lots of research to provide such a realistic background?
I’ve learnt quickly that I don’t react well to research. It slows me down, takes the immediacy out of the process. To be honest, I hardly even plot my books. For ‘Billy’ I wrote a two page synopsis, then never looked at it again. It feels more exciting that way. The book I’m working on now doesn’t have a synopsis. I’ve decided to wing it, it could go horribly wrong!!!
With Billy, I had the best research I could imagine. I’d known the kids, worked with them closely, had utterly fallen in love with them. It felt like the kind of insight that I couldn’t better.

I loved Billy, I think he is one of my most favourite characters of the year. Did you base him on anyone you knew, or is he a mixture of people you have met?
Thanks so much Viv. It feels amazing when people love Billy, as he’s so vile when you first meet him. He’s an amalgamation of kids I’d known and worked with, many of which had been in and out of different care settings. I knew kids who’d had thirty placements in three years. How can you ever make attachments to adults, or trust them, when you’ve been bumped around so frequently?

One of my favourite scenes in the book, is the camping trip. What was your favourite scene to write?
I’m glad you liked the camping scenes. They were late additions, as my editor wanted to see more of Ronnie, of his back story. And of course, she was right to want them, as it deepens Ronnie and Billy’s bond, as well as showing just how similar the pair actually are.
I think I have two favourites, the first being the boxing scene where Ronnie has built Billy the gym. I grew up loving boxing as a kid, wanted to be one until I realised how much it hurt, so I got a real thrill about writing those scenes. They’re also vital scenes in Billy’s journey, as for the first time he starts to realise that he’s angry at someone, and not just everyone.
My other favourite scene, perverse as this sounds, is when the twins are taken away from Billy. I’ve been present in these scenarios, had to peel kids away from their siblings as they move on to a new foster family. It pulls you apart. As a result this was a really draining chapter to write, but I knew it was important to get right, if I wanted to write honestly. I think I’m more proud of that chapter than anything else I’ve ever written.

Will we see more of Billy in the future?
I don’t think so. I’ve just finished writing about his mate Daisy, and in the first draft, a boy made an appearance who could’ve been Billy. That scene got chopped and I never put him back in, mainly as ‘Saving Daisy’ is about what happens to her before they meet. It stands alone as a novel, but if you’ve read ‘Being Billy’, it’s kind of a prequel I suppose.
I’m really comfortable with where I left Billy. He’s in a better place and there’s hope. The rest is up to him….

Was this your first finished manuscript, or are there others hidden away?
This was the second book I finished. The first book, which I wrote whilst bookselling, was for a younger audience, kind of Roald Dahl age. It was a great process to go through, to finish something, prove to myself that I could tell a story, but it wasn’t good enough to entice an agent to take me on. I found it the other day, then put it straight back in the drawer. Best place for it!!

Did you show your manuscript to your peers at SandS, or did you wait until it was published?
I showed a pal who works on the adult list, who gave me advice and honest feedback, but I didn’t really mention it to many of the kids team until it was out on submission to publishers. They would have laughed otherwise...

What was your first reaction when you found out that your book was to be published?
I think it’s the same reaction that I have now, two years later. Disbelief really. It’s hard to think of kids books and not think of ‘Puffin’. To be published by them and see that logo underneath your name on the spine? It’s the most brilliantly surreal thing that will ever happen to me. Makes me feel proud. I just hope I do them justice.

How did you keep yourself occupied as you waited for publication day?
I went on an eighteen month binge of drugs and destruction.
Or
I went back to work and cracked on with paying the bills. We have three kids now, so I’ve spent most of it kicking footballs, pushing swings and changing nappies. I’ve also managed to write another book and a half in that time, which feels good. Oh, and I’ve watched a few more series of ‘24’.

What are you working on now?
I’m 25,000 words into a new YA story. New characters and setting, but heavily influenced by SE Hinton’s ‘The Outsiders’.
I love that book, the sense of brotherhood in it, how the characters would lay down their lives for each other. I was really affected by that.
So I’m writing about two brothers and how their lives change when one returns from fighting in Afghanistan. It’s called ‘The Glorious Homecoming of Jammy Mcgann’. (I’ve posted the prologue on my blog)
I’ve no idea if it’s any good, but I hope so. I’m enjoying writing it, which is a start….

How do you fit writing in around your normal day job?
I can’t write at home any more. It’s like a war zone and by the time we get all three to bed we’re ready to collapse. I’ve carved out other time instead. 95% of ‘Saving Daisy’ was written on the
bus home from work, which worked really well for me. I could get anything from 500 to 1000 words done each journey.
With the new book I’m trying to do the same, but have started going to a caff for an hour before work. Tea, toast and a laptop.
I’m trying to hit 5000 words a week, which doesn’t happen often, but I get close if I put my head down.

What advice would you give to aspiring and unpublished authors?
What I love about writing is that there are no rules. Loads of people scoff and ridicule me for writing on the bus, but it works for me. I’ve proof that it does.
That’s the best advice. Find what works for you and stick to it.

Thank you Phil from some fantastic answers. Being Billy is available to buy from all major bookshops right now.
If you would like to know more about Phil Earle here are some places you can catch up with him.