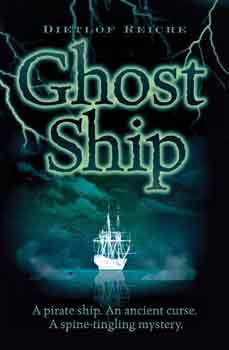 Pages - 315
Published by Chicken House in 2007
'Sunday lunchtime was always the worst.
That was when every table in the Seashell Restaurant was occupied and customers queued impatiently outside. They were mainly parents and young children, as usual, Vicki noticed as she hurried to the serving counter with a tray.'
Goodreads Summary
Vicki planned to spend her summer as a waitress in her father's seaside restaurant, a must-see tourist destination w/ its seashell-covered walls, a 230-year-old portrait of an evil eyed sea Captain & the majestic figurehead from his ship. But when the bay went dry & a 1772 sailing ship appeared, Vicki's course was reset. For where the greedy mayor saw dollars signs & a nosy reporter saw something fishy, Vicki saw ghosts. Determined to discover the truth & to uncover old family secrets, Vicki, along with her new best friend Peter, must venture into the deep & believe the unbelievable.
************
Two things attracted me to this book when I saw it. Firstly the cover, it just looks so ghostly and chilling, I couldn't resist. Secondly, the idea of a bay drying up and an eighteenth century ship appearing adrift in the bay. What a fabulously original story line. I was completely intrigued by this book and couldn't wait to read it.
I actually took this one on holiday with me, as it appealed to my holiday mood - set in a seaside tourist area revolving around tales from the past.
I have to be honest and say their were some things that were too obvious in the plot line. The occasional event occurred that were just to easy to predict. Although on the whole I was urged on to read to find out the ending. In some scenes, I would have also liked more action, but that is just my personal preference.
I really liked Vicki and Peter, the two main characters within the book. Vicki seemed to get away with murder as her parents were so busy with their restaurant, so she seemed to have a lot more freedom of a twelve year old than I would have expected.
There are some dark and chilling scenes within the book which I really enjoyed. To me, this was a good old fashioned mystery story with a modern setting. Give me a mystery and a curse and I am a happy girl.  If you liked the ' Secret Series' by Enid Blyton or you have read and enjoyed the more modern equivalent,' The Adventure Island' series by Helen Moss, then I think you might enjoy this one.
It is very rare to read a German author, in fact the only other German author I have read is Cornela Funke  who also is published by Chicken House.  I love that Chicken House embrace all nationalities providing us with a wider range of fiction.
at October 18, 2011