FrostFire is nearly here! And I am soooo excited. I love the way Zoë Marriott writes, so I was extremely excited to be part of her blog tour. I shall now pass you over to Zoë to talk about writing fantasy. 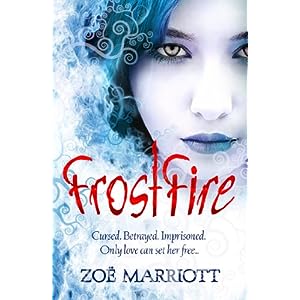 Fantasy is a strange genre, really. If I tell you that I'm reading a detective novel or a romance, or even a piece of literary fiction, you'll probably be able to guess at what I'm reading about. Someone's going to die or something valuable will be stolen, and one or more of of the characters must solve the mystery. A couple will meet, undergo separation through internal or external forces, and eventually get together or part forever. Or someone will undergo some kind of personal transformation - amid hopefully beautiful descriptions - which may or may not lead to meaningful conclusions about the world or themselves.
Don't get me wrong, I love all those genres. But the contents of a novel within the genre must generally conform to its conventions, or it won't BE a detective novel, romance, or piece of literary fiction.


If I tell you I'm reading a fantasy suddenly the possibilities are infinite. You simply can't know what's in there. Am I reading about talking cats? Apocalyptic battles? Road trips? The end of this world or the beginning of a new one? Magic? Religion? Everyone dying or everyone turning into robotic squids? The plot could focus on romance, or history, or war, on personal transformation or even a detective story of its own. Fantasy literally contains legions. If an author says their work is fantasy then the world accepts it as such, which means you can write ANYTHING YOU WANT.


That's why, for me, *writing* fantasy is really a process of opening your mind to all the possibilities - and then steadily eliminating them. Because if you can write about anything, then that makes it even more vitally important to chose the right things.


What do I mean by 'right'? Nothing restrictive, really. I don't mean that there's a checklist of Right and Wrong character types, topics, themes or plots. I mean that you have to learn to narrow your focus, cutting through all the distracting peripherals (all those cool ideas that you like just because they're cool) like a miner cutting away bedrock, until you hit gold. Gold being the character, topic, theme or plot line that gleams in your imagination, that captures your own heart and mind so strongly that you're desperate to explore it. That you can envisage constructing an entire fantasy universe around it, just to show it off to the best advantage.


For some writers this might be a system of magic. Or a particular setting or environment. It might be a certain kind of plot, or even a tone or mood. For me, it's usually a character.


So let's say a character taps on my shoulder. Or clears their throat behind me. Or, maybe, screams in my ear. How do I go from there to creating a fully realised fantasy story? Well, the first thing to do is to try to understand who the character is. Let's say they're a character who has been forced into constantly running from trouble by their life circumstances so far, like Frost in FrostFire. This results in them believing that they're useless and cowardly - but actually they have remarkable, untapped qualities of bravery and strength.


Immediately it becomes clear that I need to eliminate a lot of story possibilities in order to limit this character's choices. Put her in a situation where she can no longer run. Not just because I'm evil to my characters (even though I am, mwaaahaaha!) but because those qualities will never get the chance to manifest if she's not forced into a corner.


What kind of a setting makes it hard for a character to run? Impenetrable forests. Treacherous mountain paths that crumble underfoot. Shaley slopes and steep cliffs. Ruan - a wild and mountainous country that I previously created for my second book Daughter of the Flames - is perfect.


But it needs to be more than just the setting that slows this character down, because you can still run even at a walk. What other external forces could prevent her from following her lifetime habit and moving on, no matter what?


Well, it seems like the heroine is fighting an internal battle between the two sides of her nature - who she really is, and who she THINKS she is. So let's go with that theme. Let's say that she walks into a conflict, and is caught between the two sides. How can I make that happen?


What if the kingdom is recovering from a short and brutal civil war (I've already sewn the seeds of this in the previous book, after all)? Those forested mountains could be overrun by the consequences of that war - soldiers from the losing side turned to ruthless bandits, and brave royal warriors, sent into the forests to fight those bandits and bring them to justice.


I've already decided that she's brave (although she doesn't realise it). So what if, in the midst of this conflict, the heroine finds herself in a situation where someone appears to need her help? And then - again, going with the theme of being caught between a rock and a hard place - let's have the situation turn on its head, so that actually she makes things worse. Now she owes someone - Aha! No, TWO someones - for her mistake. That's a tie she'll struggle to break.


The heroine is now involved with people, which is great for me as the author, because I know that people always cause a tangle. These two men that the heroine has come into contact with is each compelling to her in a different way and appeals to a different part of her. Perhaps one of them wouldn't be enough to hold her in place, but both of them? They might just keep her still long enough that she begins to form other friendships and connections with people. So now the heroine is fighting her own internal battle, and fighting her environment, and fighting her feelings for two men - and a wider circle of friends - as well.


Sounds rough. Let's make it even worse (told you I was evil)!


The external forces we've brought into play - those bandits - are still out there, and the danger they represent is applying pressures to the heroine and her two guys. Eventually something is going to break. The heroine's internal struggle gets too much for her. She reverts to old behaviours and tries to run, of course - what stops her? What will hold her in place and force her to evolve into the person that she should be?


She's already caught in the middle emotionally, physically. But because this is a fantasy it's possible to invent more than settings and conflicts. I can also invent uncanny stuff. So let's bring Frost's soul into this too. There's a battle going on between two more forces - the forces of the God of this country and a God or Demon from her old home. Both of them want Frost's soul, her devotion, her spirit. She's at breaking point in every other way, and this allows that spiritual battle to flare into life.


We've now done everything possible to force this character to grow and change and become who she should be. And because she's tangled up with other people, her transformation will change them too. And if a lot of people in the middle of a battle are changed, then the course of the fight will be too.


See how that works? By finding the one thing you are utterly invested in exploring (a character, in this case) and then closing down the choices around it, forcing it to display all its most interesting qualities, and to evolve and change, you are also closing down the possibilities of your fantasy world and people and plot too, leaving you with only the vital elements that will help you to create a strong story. You can do this whether the thing you're invested in is a world peopled by robotic squid, or a heartbreaking romance between talking cats, or a twisting detective plot about the end of the world.


Find your gold, cut away everything else, and with any luck your fantasy will shine.

You should always listen to Zoë, because she knows! FrostFire will be available to purchase from the 5th July but is available for pre-order on Amazon. co. uk!


Now who wants to see the trailer for FrostFire which went live first thing this morning??
at June 22, 2012