Swallows and Amazons by Arthur Ransome 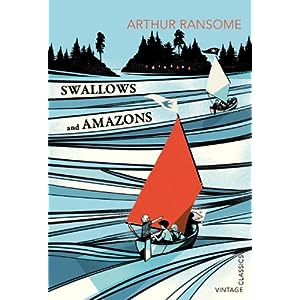 ‘Swallows and Amazons for ever!’
Goodreads Summary


The Walker children – also known as Captain John, Mate Susan, Able Seaman Titty, and Ship’s Boy Roger – set sail on the Swallow and head for Wild Cat Island. There they camp under open skies, swim in clear water and go fishing for their dinner. But their days are disturbed by the Blackett sisters, the fierce Amazon pirates. The Swallows and Amazons decide to wage war and so begins a summer of unforgettable discoveries and incredible adventures.


Roger, aged seven, and no longer the youngest of the family, ran in wide zigzags, to and fro, across the steep field that sloped up from the lake to Holly Howe, the farm where they were staying for part of the summer holidays. He ran until he nearly reached the hedge by the footpath, then turned and ran until he nearly reached the hedge on the other side of the field. Then he turned and crossed the field again. Each crossing of the field brought him nearer to the farm. The wind was against him, and he was tacking up against it to the farm, where at the gate his patient mother was awaiting him. He could not run straight against the wind because he was a sailing vessel, a tea-clipper, the Cutty Sark.
*********


When given the choice of which of the republished Vintage Classics to choose to review, I jumped at the chance to read Arthur Ransome’s Swallows and Amazons. Surprisingly despite being a voracious reader even as a child, I have never read this before, therefore I thought I ought to remedy it straight away. Set in Coniston where Ransome used to holiday as a child, Swallows and Amazons has a wonderful way of transporting you to the idyllic summers of your youth; where days seemed endless and the sun always shone!


Written in 1930 before the age of technology had really kicked in, Swallows has the ability to create a wonderful magic for children of all ages. The whole concept of being able to sail off to an island, alone without adults is one that most children, and even adults aspire to doing and it is only really possible to envisage this in a time where mobile phones, mp3 players and computers don’t exist.


Swallows and Amazons may appear dated and a touch politically incorrect in comparison to some books that are being published today but it remains enchanting. For me, if a book has the ability to capture your imagination and transport you to that place in your head, then the book works, and this one works very well. A wonderful summer read and one that I think many children will still enjoy today.
at August 02, 2012