The Spindlers by Lauren Oliver 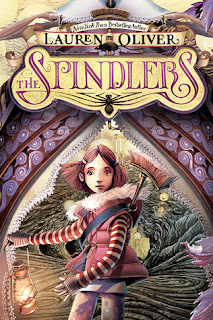 
One night when Liza went to bed, Patrick was her chubby, stubby, candy-grubbing and pancake-loving younger brother, who irritated her and amused her both, and the next morning, when she woke up, he was not.
In fact, he was quite, quite different.


Goodreads Summary
“When Liza's brother, Patrick, changes overnight, Liza knows exactly what has happened: The Spindlers have gotten to him and stolen his soul. She knows, too, that she is the only one who can save him. To rescue Patrick, Liza must go Below, armed with little more than her wits and a broom. There, she uncovers a vast world populated with talking rats, music-loving moles, greedy Troglods, and overexcitable Nids . . . as well as terrible dangers. But she will face her greatest challenge at the Spindlers' nests, where she encounters the evil queen and must pass a series of deadly tests--or else her soul, too, will remain Below forever.
*******
Both the cover and the short extract above give an accurate flavour of this charming fantasy book, ideal for 8-12 year olds. The world Lauren Oliver creates is full of colour and magic – with a good deal of creepiness. The reader encounters a host of strange creatures such as Lumer-Lumpen, Nocturni , Scawgs and of course, the wonderfully scary Spindlers.
If it sounds all a bit Roald Dahl, that’s not an inappropriate comparison, though there are touches of classical myths and legends, and a dose of traditional folk-tales too.
The author clearly revels in the rhythms and sounds of language, and enjoys detailed description – but that doesn’t mean the story lacks a strong plot. The love and loyalty of a young girl are at the heart of the action. The story is easy to follow, yet the characters are engaging and well-drawn: Mirabella the talking rat in particular.
There are moments of fanciful whimsy and sheer prettiness- and some which are decidedly scary. It won’t suit everyone. Some chapters would not make good bedtime reading for more sensitive souls!
I have only one real criticism – couldn’t somebody have told her that spiders have eight legs and are not insects but arachnids? The copy I read was an uncorrected proof so I rather hope that this has been amended in the final version.
All-in-all, this is a delightful and compassionate read for its intended audience. It would suit being read aloud for less confident readers – or just for fun – and there some important ideas to be discussed about family and friendship. Recommended.
at October 02, 2012