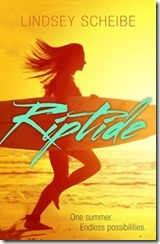 I stretch out my legs, enjoying the hot sand against my calves. Early morning sun creates an orange sheen on the ocean as I search for a big set of waves. The endless white formations roll in, lines of blurred corduroy become distinct opportunities – or not – as they roll closer to the local surf break.
Published in May 2013 by Flux Books
Pages - 288
Goodreads Summary
For Grace Parker, surfing is all about the ride and the moment. Everything else disappears. She can forget that her best friend, Ford Watson, has a crush on her that she can’t reciprocate. She can forget how badly she wants to get a surf scholarship to UC San Diego. She can forget the pressure of her parents’ impossibly high expectations.
When Ford enters Grace into a surf competition—the only way she can impress the UCSD surfing scouts—she has one summer to train and prepare. Will she gain everything she’s ever wanted or lose the only things that ever mattered?
*******
I have mixed views on this book. There are elements that are wonderful and yet there are also elements that unfortunately let the story down.
Firstly, let’s look at what I loved. The surfing and sea descriptions are outstanding. This author truly knows the art of surfing and has the words inside her to bring the descriptions to paper. She has excellent details of moves in the water I wouldn’t ever have heard of. This author had delved into the depths of her personal knowledge and brought it back to life as part of the story.
I also enjoyed the dual narrative, so that we could see what was going on in the minds of both the characters. I loved the Spanish elements of Ford’s life. You don’t tend to see a lot of Spanish YA characters, so it made a refreshing change. I felt for Grace. She was struggling to reach her dream and her parents were doing everything to stop her reaching her.
However that is where my love of this story stops, I’m afraid. My biggest problem with this book was the plot. It felt like it was full of contradictions. I felt I was being told one thing and then a few pages down I would witness something that totally went against the character’s previous actions. Here are some examples:
- Grace is known for always writing her texts in grammatically correct, yet she talks with so much slang in her sentences.
- Her father is a real ogre who beats her up, yet often in the book we are shown more of his nice side than his bad.
- Her mother hates living with her husband, yet she tells Grace to be grateful for having a father.
I think these would probably have been picked up during editing.
Also I found that in parts of the story there was far too much telling rather than showing. The whole story concerning the character that had died was told to us, rather than showing any elements of it, so it just fell flat. I found I couldn’t conjure any emotion for a character I had never met.
The romance was rather lacking too. I wanted to see the  relationship between Ford and Grace blossom, but for quite a bit of the story they were both too busy eyeing up the competition, so the romance became rushed and I lost interest.
I really wanted to love this story, but it felt that it needed more work to it. I think the author really does have talent and has captured the surfing community really well. Unfortunately this one just wasn’t right for me.
at March 24, 2013