Britain at it's best, bringing you it's own version of IMM! All the books that came through my letterbox thanks to publishers and Royal Mail!  Also all the books I have bought this week - as if I didn't have enough.
********
Review Books
The lovely peeps at Piatkus Entice have been teasing me with books this week. Miranda's Mount by Philippa Ashley ( which won best E-book at the Festival of Romance awards this week) and A Wallflower Christmas by Lisa Kleypas are two of their digital titles which have both been released in November. To find out what other delights Piatkus Entice have, please click here.
Also from Piatkus, I received Storm's Heart by Thea Harrison, which is the second book in the Dragon Bound series. This will be published on the 27th November.
Forbidden by Jacqueline Frank - this will be my first Jacqueline Frank book as it is the start of a new spin off book, from her popular Nightwalkers series. Published on the 27th November.
Jane Eyrotica can only be described as Fifty Shades of Grey meets Jane Eyre! Published on the 29th of November.
Rogue Rider by Larissa Ione is the fourth book in the Lord of the Deliverance series. Published on the 20th November.
Thank you ever so much to Piatkus for such an abundance of books! 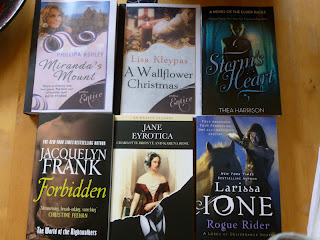 How to Fall by Jane Casey is the first YA crime thriller from the best selling author Jane Casey and will be published in January 2013. Thank you Corgi.
Ketchup Clouds by Annabel Pitcher has been on my wish list since I first heard about it last year. Annabel brought us My Sister Lives on the Mantelpiece, which so far has been nominated for 24 awards. This new book will be published in January 2013. Thank you Orion Children's Books
Hidden by P.C and Kristen Cast is the tenth book in the House of Night series and was published in October. The series is presently having a cover makeover so look out for the new look in stores now. Thank you Atom Books.
Lexiland by Suzi Moore is a heartwarming debut novel about coping with grief and loss. It will be published by Simon and Schuster at the end of January 2013. 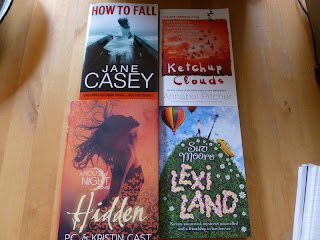 Netgalley Review
I received this book to review via Netgalley from Bloomsbury. Hysteria is the second book from Megan Miranda who brought us Fractured last year. This will be published on February 14th. Thank you Bloomsbury.

Books Bought
I had a little splurge this week. Especially for my Kindle...
A Winter Flame by Milly Johnson 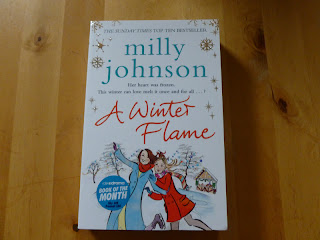 Dream Little Dream by Sue Moorcroft - this was published last week by ChocLit and will be my first book by this author.
A 1980's Childhood by Michael R Johnson.
Yours Truly by Kirsty Greenwood. Kirsty is well known as the editor of the lovely blog Novelicious and has worked hard to get this book published. This is a self published book and I look forward to reading it.
At the moment I am exploring the New Adult genre. I couldn't resist these two books.
Slammed by Colleen Hoover
Easy by Tammara Webber

So these are all the lovely goodies to come into my house this week. Which one shall I read first?