Beyond Words … The Making of the Waiting for Gonzo soundtrack

Today as part of the Waiting For Gonzo blog tour, I am pleased to invite back the rather talented Dave Cousins to tell us all about his soundtrack for his second book. 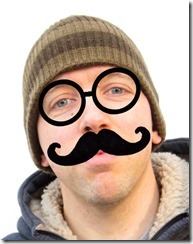 Dead Frank’s Supersonic Milkfloat were the best band on the planet. They only made two albums before splitting up, but those twenty-five tracks are … well … beyond words. I just know that whenever I listen to Dead Frank, it makes everything better – even here.
I scrolled through the music on my phone and selected Spilt Milk – Dead Frank’s seminal debut – and hit play. By the time I turned into Scar Hill Lane I was already feeling better. That’s the healing power of music, G.
(from Waiting for Gonzo by Dave Cousins, Oxford University Press, 2013)
Music plays an important role in Waiting for Gonzo. The tracks on Oz’s phone, are sometimes the only thing that keeps him going. So my publisher’s suggestion to compile a playlist of some of his favourite songs seemed logical. Except for one tiny problem: all the bands Oz loves only exist on the page and in my head!
I chose to invent fictional bands for a number of reasons. Firstly – music is such a personal thing, I didn’t want to use existing artists that readers might not like. Also, Oz is a bit of an elitist – he only listens to obscure music that nobody else has heard of. Anyway, I had great fun coming up with group names, song and album titles – everything was fine, until the idea was raised that readers might want to actually hear what Spilt Milk by Dead Frank’s Supersonic Milkfloat sounded like.
Sometimes without realising it, the seed of an idea gets planted. A few days later, I was waiting for the kettle to boil, and picked up my guitar.
You know, it might be fun if there were some actual songs out there … said the voice in my head … hidden away on the internet for readers to find if they decided to go looking.
I ignored it and started picking out a tune, then found myself mumbling the title of one of the songs in the book over the top … cigarette … UFO …
Twenty minutes later my tea had gone cold, but I had a song written.
Before I was an author – when I still had hair – I played in a band. We had a record deal and were almost famous for a while …

I rang up my old band mate, Michael – the inspiration for Dead Franks’ Michael Death in the book.
“Er … you wouldn’t fancy writing a song for me would you?”
“A song?!!!” (I could actually hear those exclamation marks rattling down the phone!)
I explained. He didn’t sound convinced.
“The band’s called Dead Frank’s Supersonic Milkfloat,” I told him.
Michael laughed.
“The song’s called Spilt Milk.”
“Mmm …” he said. “Let me think about it.”
Twenty-four hours later Spilt Milk by Dead Frank’s Supersonic Milkfloat was blasting out of my phone. I rang Michael.
“This is great,” I told him. “Perfect!”
“I enjoyed it,” he said. “Pity you don’t need any more.”
“Well …” I said, “there are three other bands in the story.” 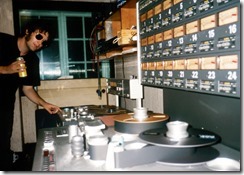 Two months later we had a full soundtrack album recorded, featuring ten original songs by all of Oz’s favourite bands – each with a unique sound and style: from the sci-fi, pop-punk of Cigarette UFO to Dead Frank’s Supersonic Milkfloat and their brittle brand of tongue-in-cheek lyrics over a rack of angry Telecasters; the epic gothic rock of Prayer for Halo and, of course, the magnificently monocular cynical sunshine pop of Cyclops Dog. Ten imaginary songs by bands that don’t exist. Which just proves that sometimes the power of music does indeed take you beyond words … 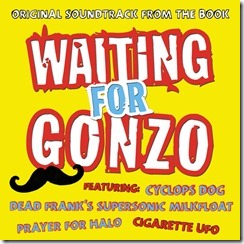 The Waiting for Gonzo Soundtrack will be released on 18 March 2013, available from www.waitingforgonzo.bandcamp.com as well as iTunes, Spotify etc.
Check out the music video for Cigarette UFO  – the song that started it all – here
Waiting for Gonzo is out now in paperback, published by Oxford University Press.
For more info visit www.davecousins.net
at March 12, 2013