Such A Rush by Jennifer Echols 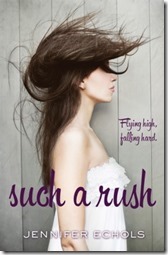 In each South Carolina town where I’d lived – and I’d lived in a lot of them – the trailer park was next to the airport. After one more move when I was fourteen, I made a decision. If I was doomed to live in a trailer park my whole life, I could complain about the smell of jet fuel like my mom, I could drink myself to death over the noise like everybody else who lived here, or I could learn to fly.
Published by Simon and Schuster in June 2013
Pages - 325
Goodreads Summary
Heaven Beach, South Carolina, is anything but, if you live at the low-rent end of town. All her life, Leah Jones has been the grown-up in her family, while her mother moves from boyfriend to boyfriend, letting any available money slip out of her hands. At school, they may diss Leah as trash, but she’s the one who negotiates with the landlord when the rent’s not paid. At fourteen, she’s the one who gets a job at the nearby airstrip.
But there’s one way Leah can escape reality. Saving every penny she can, she begs quiet Mr. Hall, who runs an aerial banner-advertising business at the airstrip and also offers flight lessons, to take her up just once. Leaving the trailer park far beneath her and swooping out over the sea is a rush greater than anything she’s ever experienced, and when Mr. Hall offers to give her cut-rate flight lessons, she feels ready to touch the sky.
By the time she’s a high school senior, Leah has become a good enough pilot that Mr. Hall offers her a job flying a banner plane. It seems like a dream come true . . . but turns out to be just as fleeting as any dream. Mr. Hall dies suddenly, leaving everything he owned in the hands of his teenage sons: golden boy Alec and adrenaline junkie Grayson. And they’re determined to keep the banner planes flying.
Though Leah has crushed on Grayson for years, she’s leery of getting involved in what now seems like a doomed business—until Grayson betrays her by digging up her most damning secret. Holding it over her head, he forces her to fly for secret reasons of his own, reasons involving Alec. Now Leah finds herself drawn into a battle between brothers—and the consequences could be deadly
******
This is my first Jennifer Echols book and I can assure it won’t be my last. I really struggled over what star rating to give it and eventually decided it would have to be four and half stars. The main reason I didn’t give it five was purely because of the first two chapters. I found the back story to be quickly condensed into them and I nearly put the book down. I felt a lot of information was thrown at us, which annoyed me. Luckily I didn’t give up because by the end of Chapter 3 I was completely hooked. I could even understand why all the information had been related in those first couple of chapters as it explains the confusing relationship between Grayson and Leah and you are totally involved in their lives from that point on.
The book has that Pretty In Pink feel to it, as you watch the underdog from the wrong side of the tracks take on the richies and turn her life around. She shows them how much stronger she is than them and how much they need her in their lives.
I loved Leah. She was on the verge of becoming  trailer park trash girl, but her quick thinking and determination changes the direction of her life. She knows exactly what she wants and intends to get it. She fights against the stereotypical person she is believed to be. She is passionate about flying – she has no intention of following any other path in life and her focus on it appears so controlled. And Grayson! Whoa! He was HOT! The bad boy turned serious and sensible, yet still oozing badness out of every pore. I don’t think any reader would be able to resist his charms. Together Leah and Grayson make a sizzling couple and the romance aspect of the novel is swoon worthy.
The book deals quite heavily with flying; this is a subject I haven’t ever seen in a YA book before and I really enjoyed it. Either the author actually knows how to fly or she carried out a lot of research in order to give the story an authentic feel.
I really enjoyed losing myself in this story. I’ve got a couple more books by this author that I will be delving into soon. This is a beautiful summer read and it would be ideal for the beach!
at June 10, 2013

Email ThisBlogThis!Share to TwitterShare to FacebookShare to Pinterest
Labels: flying, Jennifer echols, new adult, simon and schuster, such a rush