The Night Itself by Zoe Marriott 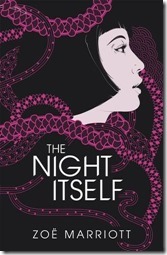 Stealing the sword was a bad idea. I can’t pretend I didn’t realise that at the time. I wasn’t even supposed to know about the thing, let alone sneak up and snaffle it from the attic where it was carefully concealed in the dark, under layers of cobwebs and rotting Christmas decorations.
Pages – 365
Published by Walker Books in July 2013
Goodreads Summary
When fifteen year old Mio Yamato furtively sneaks the katana - an ancestral Japanese sword - out of its hiding place in her parent's attic to help liven up her Christmas party costume, she has no idea of the darkness she is about to unleash on modern day London, or the family secrets that she is going to uncover.
The paralysing paranoia that descends on her before she gets to her friend's party is her first clue. The vivid and terrifying visions that nearly get her killed are a pretty good warning too.
The giant nine-tailed cat demon that comes after the sword and tries to rip her throat out? Overkill.
Seconds away from becoming kitty-food, Mio is saved by Shinobu, a mysterious warrior boy. But it's already too late. Mio has ruptured the veil between the mortal realm and the Underworld, and now the gods and monsters of ancient Japan stalk the streets of London, searching for her and the sword.
With the help of her best friend Jack, a fox spirit named Hikaru - and the devoted protection of the bewitchingly familiar Shinobu - Mio attempts to discover the true nature of the sword and its connection to the Yamato family. Because if she doesn't learn how to control the katana's incredible powers, she's in danger of being overwhelmed by them. And if she can't keep the sword safe from the terrible creatures who want it for their own, she'll lose not only her own life... but the love of a lifetime.
******
There’s no doubt that Zoe Marriott’s books are original and a little bit special. After wowing us with high fantasy novels such as Frost Fire and Shadows On The Moon, the author has moved in a more urban fantasy setting presenting an excellent book in her first trilogy. From the very first sentence, you’re aware that this will take you on a very different journey from any other trilogy you’ve read. I can’t compare it to any other trilogy, because the author has created her own unique route in YA.  How often have you come across a katana in a house in the UK??? Seriously kudos for originality!
Mio isn’t your stereotypical character either, her Japanese heritage makes her stand out from the rest. She is small but feisty and deals with the quick turnaround of events in her life with ease and maturity. It felt like her family’s past was inbred into and released as soon as she retrieved the katana. Shinobu’s feelings were obviously strong for her from the beginning, but then he had experienced many years to cultivate them. I look forward to watching the growing relationship between Shinobu and Mio. Hikaru was my favourite character of all. I loved him as soon as his bushy tail appeared. His modern, young,voice contrasted well with Shinobu’s mature, classical one. The characters present a very British feel to this book; their constant banter is so realistic and dry in humour. The author has managed to make fantasy appear very real.
I loved that this was set in the UK. The inclusion of Battersea Power Station really excited me. I’m surprised it hasn’t made an appearance in more YA books in recent years as it is definitely a place full of history and mystery that needs to be explored.
The plot is well paced as you swiftly fly through the story with secrets and history unfolding with each chapter. The ending was dramatic and thankfully nothing was left unfinished, even though this is part of a trilogy.
I love that the author has embraced the Japanese culture to write such a promising start to this series. I think we could see the start of a new trend in Japanese inspired novel – thanks to Zoe! If you like your trilogies fast and furious, then this is definitely for you.
at June 12, 2013