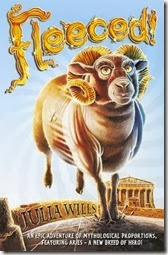 Our story begins in the Greek Underworld.
And yes, I do know Greek Underworld sounds a bit like Greek underwear, but let me assure you that our story has nothing to do with pants. In fact, the ghosts who haunt this Underworld don’t even wear pants because pants hadn’t been invented by the time they died. So please, do stop talking about pants and let me get on.
Published by Templar in January 2013
Pages – 383
Meet Aries, the wise-cracking ghost-ram of the Golden Fleece!
Aries, the ram of Golden Fleece fame, remains furious at the loss of his beautiful coat - stolen by Jason and the Argonauts centuries ago. So he hatches a plan to return to earth, along with his friend Alex, zookeeper of the Underworld. But instead of arriving in ancient Greece, they teleport slap-bang into the British Museum in modern day London.
Aries and Alex soon discover that the Golden Fleece is in the clutches of evil immortal sorceress Medea - now a world-famous fashion designer. With the help of twelve-year-old human girl Rose, Aries and Alex must foil Medea's wicked plans and save Aries from an eternity of being bald!
****
This isn’t the type of book I would normally read, but I was attracted to the story instantly. Being an Aries myself, I was curious to know more about the mythological ram with the Golden Fleece and quite intrigued on how I would get on with a story whose main character has four legs!
Aries bursts on the scene straight away in this book and constantly batters you for attention – he is not a creature to be ignored. He is entertaining and full of zest at times, while naive at others causing him to jump hoof first into a hilarious adventure as he searches for his Golden Fleece. I really enjoyed the friendship between Aries and Alex as he accompanied the eager ram back to Earth. I was slightly lost in the Greek mythical world to begin with, but that is mainly due to lack of knowledge rather than the story. For me the book really got going, when Alex and Aries made they debut in modern society. I loved Rose – what a gutsy, go-getting girl she was, instantly catching the attention of Medea, who wasn’t the nicest of characters.
Once back on Earth the book sets off at a mad pace, as the characters search for Medea and the Golden Fleece. I was thoroughly entertained as I swept through the fashion world and encountered a variety of breeds of sheep.
I loved the footnotes provided by the author. I always feel like we have been given something free by the author when these are included; little glimpse into how their writing mind works. The author has also provided a glossary at the end of the book, so that any unusual Greek terms can be easily understood.
This was a thoroughly entertaining tale, that brings Greek Mythological in an easily understandable and entertaining way to the 9 to 12 age bracket. It would appeal to both boys and girls with the witty humour and madcap adventure.