As part of the New Adult tour, organised by Faye from Daydreamer’s Thoughts, I am reviewing Finding It, by Cora Cormack. At the end of the post, you will find details of the Scavenger post which is running alongside the tour. 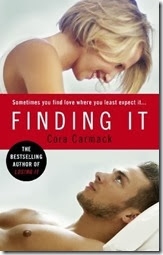 Everyone deserves one grand adventure, that one time in life that we always get to point back to and say,’Then …then I was really living.’
Published by Ebury Press, an imprint of Ebury Publishing which is a company of Random House in October 2013
Pages - 307
Kelsey Summers is looking for love in all the wrong places.
Spending a few months travelling around Europe - with no parents, no responsibilities and a no limit credit card - Kelsey's having the time of her life.
But when she completely embarrasses herself in front of the hottest guy she's ever seen, she soon realises there's more to life than the next party.
What she doesn't realise is that although she's on a journey to find herself, she will end up finding The One...
*****
This is the third book in the Losing It series, but like so many New Adult series, it doesn’t need to be read in order. This was my first book and I didn’t feel as though I had missed out in any way by not reading the first two books to begin with. It was clear that Kelsey had appeared in the previous two books but this one was completely about her and her journey into adulthood.
To be honest, I didn’t like Kelsey much to begin with. She came across as spoilt, brattish and immature. Though as the story unfolds, you start to realise why she acts the way she does. Events in her childhood, scarred her future and molded her into a person she didn’t really want to be. It was quite sad to see how little her parents actually cared about her; they were only interested in how they appeared to the outside world.
When Kelsey met Jackson, there was an instant attraction. And what a hottie he was. He practically slid off the page. I kept imagining the more recently buff, Zac Efron, taking the role, should the story ever reach the screen. He was ever so gentlemanly and as I always say, if a man can hold your hair up, while you barf down the toilet, then he’s a keeper.
The book sets off on an exploration of Europe as their relationship jumps continuously between hot and  cold. This got annoying in the end. I just wanted them to end up together and it just seemed to go on forever. I am not a patient person when it comes to true love! In the last third of the book, they finally get together, only to be ripped apart by the truth. Now I will be honest and admit, I did not see these events coming. I had my own ideas as to why Jackson kept pulling back, and they definitely did not match the real reason.
The book ends on a happy note, which pleased me. Although after reading this one, I’m not sure I want to read the first two. I just found the on and off monotony of the relationship dragged too much for me. The book had an extremely strong opening, but by the end I was losing interest.
*****
Your scavenger hunt clue is:
7
To find out more about the Scavenger Hunt, please click here
a Rafflecopter giveaway
at January 24, 2014