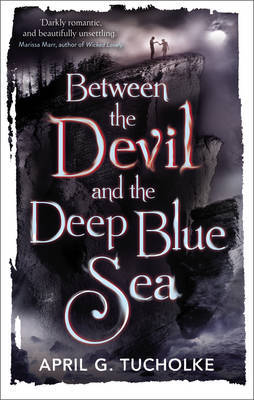 ‘You stop fearing the Devil when you’re holding his hand.’
Published by Faber and Faber in March 2014
Pages – 360
Book Summary
Nothing much exciting rolls through Violet White’s sleepy, seaside town… until River West comes along. River rents the guest house behind Violet’s crumbling estate, and as eerie, grim things start to happen, Violet begins to wonder about the boy living in her backyard.
Is River just a crooked-smiling liar with pretty eyes and a mysterious past? Or could he be something more?
Violet’s grandmother always warned her about the Devil, but she never said he could be a dark-haired boy who takes naps in the sun, who likes coffee, who kisses you in a cemetery... who makes you want to kiss back.
Violet’s already so knee-deep in love, she can’t see straight. And that’s just how River likes it.
******
Doesn’t that first sentence at the beginning of the post just send shivers down your spine? I think that has to be one of the best first lines I have ever read. It completely captured my interest and I had to keep reading to find out more.
I loved the idea behind this book. I thought it was intriguing and refreshing, if not rather creepy. The first half of the book has you looking over your shoulder constantly as you really don’t know what to expect. Poor Violet is like a fly trapped in a spider web. River has such an effect on her that she doesn’t know what she is doing – she is acting completely out of character. River’s presence in the town adds to the creep factor – as I read the book, I kept thinking of the 90’s TV show, American Gothic. The book definitely had that feel to it, as well as a hint of Daphne Du Maurier’s Rebecca. I can see where the references to The Great Gatsby come from as you learn little bits about Violet’s grandmother as the book progresses.
I found it difficult to work out whether this book was set in the present day or not as it has a timeless feel to it. The characters have none of the mod cons you would expect to see on our present day YA characters. Hell, half the time, they don’t even have electricity! I can’t even begin to guess which era it is set in.
I have to be honest and say I enjoyed the first half of the book more than the second half. Don’t get me wrong, the story is good, but I found the second half didn’t reach the scary levels the first half had pushed me into. The arrival of a couple of new characters half way, diffused the creepiness for me. I would also have liked a certain character to have appeared or been mentioned more in the first half to give him more credibility in the second half of the book.
Apart from this though, I did enjoy the book. I loved the setting. It had a strong New England feel to it, and it felt like a place the author knew well. I really liked the characters too, especially Sunshine. I’m not sure but I get the impression this book might be the first part in a series, and I would definitely like to find out what happens next.
A promising debut with an unusual YA premise.
at February 05, 2014