You’re The One That I Want by Giovanna Fletcher 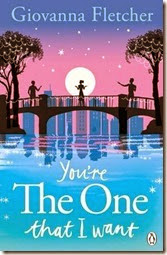 Only fifty-two feet stood between me and my husband-to-be. All that was left for to complete the transformation from Miss Maddy Hurst to Mrs Maddy Miles was to walk that fifty-two feet and say my vows. Then I’d be able to leave the past behind and look to the future…
Published by Penguin in May 2014
Pages – 320
Maddy, dressed in white, stands at the back of the church. At the end of the aisle is Rob - the man she's about to marry. Next to Rob is Ben - best man and the best friend any two people ever had.
And that's the problem.
Because if it wasn't Rob waiting for her at the altar, there's a strong chance it would be Ben. Loyal and sensitive Ben has always kept his feelings to himself, but if he turned round and told Maddy she was making a mistake, would she listen? And would he be right?
Best friends since childhood, Maddy, Ben and Rob thought their bond was unbreakable. But love changes everything. Maddy has a choice to make but will she choose wisely? Her heart, and the hearts of the two best men she knows, depend on it...
******
Imagine standing at the altar, ready to marry the man you’ve known since childhood, only to realise that you might have picked the wrong one. A scary thought, but that is exactly how Maddy feels at the start of this story.
The reader is left in the dark as to how this will end, as the story transports them back through the lives of Maddy and Ben, the best man, as they each tell their version of events through a dual narrative. This is an excellent example of how to write a love triangle. The reader is left hanging until the epilogue, unsure of which way Maddy’s affections will finally fall. Both of the male leads are such wonderful characters, that it is impossible to show allegiance to either side. This book is brimming with emotion and every moment of unrequited love hits you straight in the heart.
This is the type of book that would make a fabulous chick flick. It has so many elements that Richard Curtis (creator of films such as Love Actually) would lap up. Throughout the second part of the book, I forgot that I was actually reading it, as the story played out visually in my mind. I was glued to it and honestly couldn’t put it down.
To say I was surprised at how good it was is an understatement. I was dubious to the author’s talents as she is better known for her marriage to the lead singer of the group, McFly, than her writing skills. On reflection, I’m certain the author could cast a wet blanket over any fired up doubters that might have questioned her writing ability. Giovanna Fletcher has created a beautiful love story, filled with the real temptations of life that will sweep readers off their feet.
Summary
at May 12, 2014