The Write Way with Curtis Jobling

I recently got the chance to meet Curtis Jobling at my daughter’s school. He was there for an author event to promote his latest YA book, Haunt: Dead Scared. Curtis was already well known for his sensational  Middle Grade  series, Wereworld, not to mention his close association with Bob the Builder.  During the assemblies, Curtis really caught the attention of the kids, to the point where I can only presume his Twitter followers escalated, because mine most certainly did purely through association.
In between his assemblies and workshops, I managed to grab five minutes with Curtis in order to interview him. 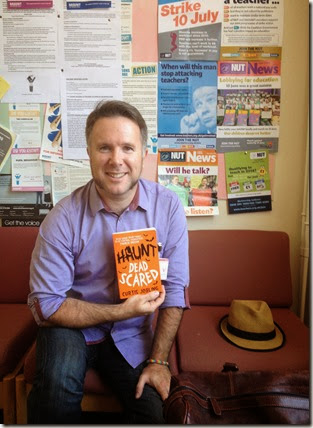 1) If you could sum up the plot to Haunt: Dead Scared in one sentence, what would it be?
A buddy buddy bromance that shows that love and friendship doesn’t end in death.  Or another version – Randall And Hopkirk Deceased for a new generation!
2) You have written for all age groups, which is your preference?
The older the better, that way I can cut loose and I don’t need to self edit so much. I would love to thoroughly get my teeth into YA. Wereworld straddled  Middle Grade and YA, but was pitched more towards Middle Grade. Even though anyone who has read it would say it was more YA because of the content. I would love to do something that was pure YA.
3) When writing YA, I was told it was better to not have any adults in the story, what are your views on this?
I think you can have adults in there as wallpaper or a backdrop, but the heart of it must be young adults.
4) When you write a book, do you ever consider what age group it will be pitched at?
No that is up to the publisher and the bookseller. Wereworld was meant for myself first and foremost. As the series progresses it gets darker and  moves away from Middle Grade to YA. There are things I do to the characters that shouldn’t appear in a Middle Grade book.
5) I love the cover, there seems to be a move towards more neon coloured covers.What are your thoughts?
I think it is pumpkintastic. It has got a real Halloween feel to it, with the orange and black.
6) Do you miss writing the Wereworld books now they are finished?
I do. A week doesn’t go by when I don’t get fan mail from people asking when are you doing more Wereworld books.
7) Would you consider writing more?
I would love to, but I am having a little break to write the Haunt books. I do have a few stories that I would like to write in that world though. I may go down that route in the future. Perhaps even write some short stories set there.
8) Have you been approached to write a novella for World Book Day in the Wereworld series?
No, I haven’t. I am friends with Kristen from World Book Day and I did take part in one of their events in North West this year. I would be interested in writing one though. So Kristen, if you are reading this…
9) Animation is very close to your heart, how do you divide your time between animation and writing?
I don’t do any animation anymore. I turned my back on it  for a bit. I am having too much fun writing at the moment. Making a TV show involves a lot of compromise due to the finances involved, so your story gets altered a lot. With writing you don’t have that so much, as you only have to appease your editor and 95% of the time you are usually in agreement.
10) Do you find writing gets easier or harder with each book you write?
You are always learning. I plot things out. I do bullet points of what my story is going to be before I commit to writing. When I am happy with that structure I will get stuck into it.
11) Do you have a set writing and editing process?
Not really. I set myself a minimum writing limit. Usually 1,000 words a day, which I will try and write on the train. With editing, I will then go back and look at structure and dialogue, before going through it again to look at word count. Then I will let my wife read it before sending it to my editor.
12) What comes first for you – the character, the plot or the idea?
The idea, always the idea. Then the plot followed by the characters. If you have the idea first, the plot and characters will take care of themselves.
13) If you could meet any author in history, who would it be?
JR. Tolkien without a doubt. 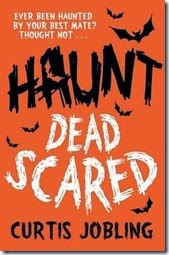 Haunt: Dead Scared was published in June by Simon and Schuster.
Book Summary
When Will finds himself in hospital, but unable to make anyone see or hear him, he realises that he never made it home from his first date with the school hottie. Knocked off his bike in a road traffic accident, Will is now officially dead - and a ghost. But somehow his best mate, Dougie, can still see him, and, once they've exhausted all the comic possibilities of being invisible, they decide to delve into the truth behind a school rumour - whether there really is an unhappy spirit haunting the ruins in the school grounds, and if so, why? What they discover is a long-buried mystery, which stretches its fingers right into the present…
To find out more about Curtis Jobling:
Twitter / Website