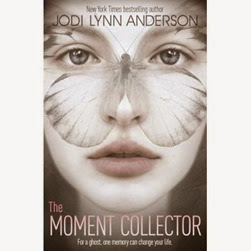 A key is buried under the front stairs of 208 Water Street. Scorched on one side, was it in a fire? Who lost it, and when?
From me, it’s a clue, a piece of the past. Because the yard of this house is a graveyards of moments, and everything left behind is a reminder: sand paper, a bracelet, a love note, some letter, a match, a movie stub, a postcard.
Published by Orchard Books in August 2014
Pages – 256
Summary
There's a ghost haunting 208 Water Street. She doesn't know who she was, or why she's still here. She does know that she is drawn to Maggie, the new girl in town, and her friends - beautiful, carefree Pauline and Liam, the boy who loves her.
But the ghost isn't all that's lurking in Gill Creek... Someone is killing young girls all across the county. Can the ghost keep these three friends safe? Or does she have another purpose?
*****
Although I enjoyed this story, I found myself confused about it for nearly three quarters of the book. It wasn’t until I reached the end, that I truly understood what was going on.  From the first few pages, we know a killer is on the loose in the little town, but we never ever find out who it is. It felt as though a certain aspect of the story was set up in the beginning but unfortunately not carried through to the end.  I couldn’t see the point of making such a big deal about the murders if they weren’t integral to the plot.
Out of all the characters in the book, Maggie was definitely my favourite. She was a bright young thing, who worked hard at her studies and did all she could to make her parent’s lives easier.  On arriving in town, she was soon befriended by Pauline, who annoyed the hell out of me. Pauline came across as flighty and immature. I felt that she used Maggie when ever she felt she needed a friend. It was pretty obvious from the start that Pauline would always win every outcome.
This story is told mainly in third person, apart from the sections where the spirit speaks in first person. Now I’m a big fan of using  a mixture of narrative points of view in one novel but I will be honest, I struggled with it in this book until the very end. By the time I reached the conclusion,  it finally dawned on me why it had been written in this way and completely made sense; however I felt that was a bit too late to appease my annoyance throughout the rest of the book.
The ending was the saviour of this story. However I was quite shocked to discover the true identity of the ghost in the last chapter. This was an OK read with a really strong ending. If you enjoyed  A Certain Slant of Light, you would probably enjoy this one too.
at November 20, 2014