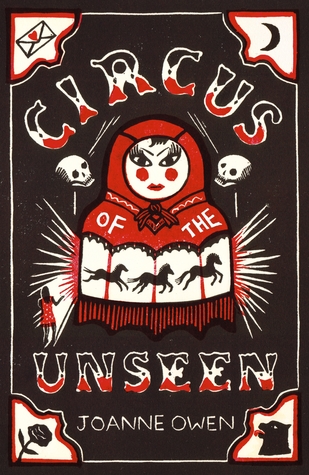 Long ago, when the world was young and people still thought of the marsh and the mists and the witch in the woods, there lived a girl called Vasilisa, whose mother fell gravely ill. On her deathbed, Vasilisa’s mother called for her daughter. She took a little wooden doll from beneath her pillow, saying, ‘When I am gone, I shall leave you this doll with my blessing. Promise me you’ll always keep her with you, and promise me you’ll never show her to another soul.’
Published by Hot Key Books in November 2014
Pages 304
After an accident at her grandmother's house, Rosie is transported to a strange and sinister world populated by a cast of carnivalesque characters who reside in the Circus of the Unseen. They are reigned over by an old woman called Madam Matushka, who guards the threshold between life and death and has extraordinary powers over all around her.
This is an in-between world, a bizarre and trapped existence, but Rosie is not like the others here. She seems to be hovering between the worlds of the living and the dead, and she is a challenge to Madam Matushka. Can Rosie escape Madame Matushka's malevolent rule and a world in limbo? And can she help resolve another mystery - one at the heart of her grandmother's life?
*****
Firstly I love the cover of this book! It has The Night Circus written all over it. I definitely think gothic circus now when I see black, white and red together, so I don’t think Hot Key Books could have picked a better cover.
As for the story itself  I have mixed emotions about it.
Firstly I enjoyed the Russian feel to it. That is something I haven’t come across before in children’s fiction before. I found the beginning part of the book a little slow to start and my enjoyment of it grew when Rosie stepped into the between world ruled by Mother Matushka. I was morbidly fascinated by the bizarre descriptions of Coco and Lola. Although I definitely wouldn’t want to come face to face with them in the middle of the night.
I loved the setting. It sounded exotic and frightening all at the same time. There is definitely a real gothic feel to the in between world, which was full of what seemed like the half dead.
I struggled to work out which age group this book was actually for. At first I thought it was Middle Grade, but on reading it, it felt quite dark for that age range, so I wondered if it was bordering on YA, or perhaps should be represented as older Middle Grade.
The writing requires concentration. This isn’t a book you can whip through quickly. With a lot of Russian folklore  hidden within it,  at times you find yourself confused about what is really going on.
I wasn’t completely convinced by the ending. I had to reread it to make sure that I was reading it correctly. Knowing how much Rosie loved her family, it didn’t feel right to end it the way it did. If I’ve got it wrong, then please shout at me, but I couldn’t seem to read it any other way.
I am hoping to read this book again; mainly because there was a lot of it that I just didn’t get. I think if you read at a slower rate than I do, you are more likely to enjoy this book and understand it better. So not one of my favourite books, but definitely worth a read, if you are looking for something different.
at January 23, 2015