I Shall Wear Midnight by Terry Pratchett 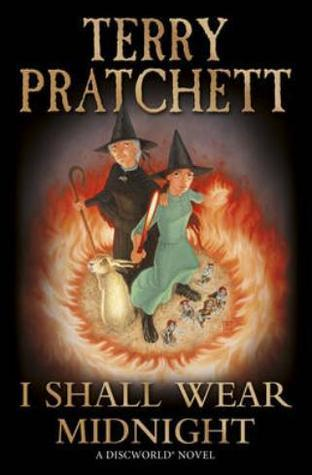 Why was it, Tiffany Aching wondered, that people liked noise so much? Why was noise so important?
Published by Doubleday Books in September 2010
Pages – 349
Illustrations – Paul Kidby
Summary
It starts with whispers.
Then someone picks up a stone.
Finally, the fires begin.
When people turn on witches, the innocents suffer. . .
Tiffany Aching has spent years studying with senior witches, and now she is on her own. As the witch of the Chalk, she performs the bits of witchcraft that aren't sparkly, aren't fun, don't involve any kind of wand, and that people seldom ever hear about: She does the unglamorous work of caring for the needy.
But someone or something is igniting fear, inculcating dark thoughts and angry murmurs against witches. Aided by her tiny blue allies, the Wee Free Men, Tiffany must find the source of this unrest and defeat the evil at its root before it takes her life. Because if Tiffany falls, the whole Chalk falls with her.
*****
I Shall Wear Midnight is the 38th Discworld book and the fourth in the Tiffany Aching series, which is aimed at the YA market.  It was believed to be the last of the Tiffany Aching books, but a fifth one, The Shepherd’s Crown, will be published posthumously this year.
When you read a Terry Pratchett book, you know that you're entering a well planned, finely detailed fantasy world, like no other. Terry Pratchett's world is like ours in some ways, but so distorted in others. I am in awe of his talent; it makes you wonder where his ideas came from.  I loved the idea of a Good Dungeon Guide, where the best dungeons would win five balls and chains.  I also liked the way he created characters based on real people. For instance, the young man called Simon, who had been cursed with every ailment, making it impossible for him to walk, yet being granted the power to understand the who of the universe,  screamed Stephen Hawking at me.
Tiffany Aching  has to be one of my most favourite female YA characters. She is innocent,yet worldly wise at the same time. There isn't anyone she is frightened of taking on, constantly standing her ground where others would run away.  There is a strength of character running solidly through her bones, making her stronger with each disaster as we watch her grow up through the series.
In this story, Tiffany faces some dark times. You get to see the full extent of  what whispering can cause. As the whispers turn to accusations, Tiffany realises her future as a witch is in  jeopardy. Witches are no longer trusted; fear has spread like a virus throughout the Chalk. Tiffany’s whole way of life is threatened, yet she shows no fear as she takes on this new threat.
You can’t review any of this series, without showing love for the Nac Mac Feegles, who are so loyal to Tiffany and protect her constantly from the trouble that keeps surrounding her. They add such humour to the story, with their hilarious antics, breathing lightness into this dark tale.
Although these books can be read out of order, I would strongly suggest reading the Tiffany Aching books in the right order. I would recommend Wee Free Men as a starting pointing. Once you start reading, you will want to keep on reading the series.  A mixture of humour and darkness, keeping you entertained until the end.
I can’t wait for the final book, The Shepherd’s Crown.
at April 11, 2015