The D'Evil Diaries by Tatum Flynn 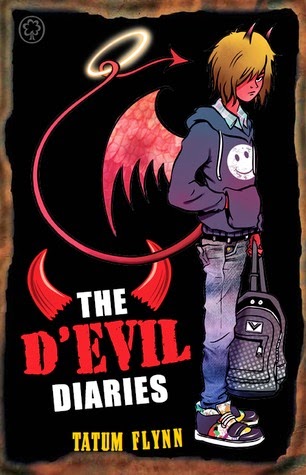 High above the cavernous glass roof of The Poison Gardens, the crimson skies of Pandemonium swirled lazily over the city. Inside the greenhouse, the spiked black branches of the Nemesis Tree  swooped and darted like kraken tentacles searching for ships. The sap oozing from the Tree's trunk was bright yellow and smelled uncannily of mouldy trainers. Any creature unlucky enough to get too close would be swept up before being slowly crushed to death.
Published by  Orchard Books in April 2015
Pages - 273
Illustrations by Dave Shepherd
Summary
Twelve-year-old Jinx is hopeless at being evil. Which is a bit of a problem when you're Lucifer's youngest son. But when Jinx runs away from Pandemonium, the walled city he's lived in all his life, he bumps into dead girl Tommy - who's been sent to Hell for accidentally feeding her nasty uncle to a circus lion - and unearths a conspiracy that could up-end the entire underworld.

Cue shenanigans involving carnivorous carousel horses, death-trap-riddled libraries and hungry quicksand. Now the fate of the realm rests in the hands of its most unlikely demon and a girl who shouldn’t be in Hell at all...


*****
I'm actually not sure what I am most envious of - Tatum Flynn's incredible imagination or her hilarious sense of humour. I found myself reading this book, constantly thinking, why can't I be as talented at this author?
I'd imagine you've guessed by now that I really enjoyed this book. The world building was astounding. I can actually picture Hell in my mind and I hope if I  do something really bad and have to spend eternity there, it  will be just like the author imagined. Pandemonium felt like a really cool, yet evil place to hang out in.  I love all the distinctive areas within Hell, each with their own horror to unveil.
I had a fit of the giggles constantly while reading  this story.  Jinx, Lucifer's youngest son, is really funny. I loved the scene where he turned Count Dracula into a healthy, fun loving guy, who now works for the Milk Marketing Board! This was absolutely priceless. The rest of the characters were entertaining and enigmatic. I found myself really liking Lucifer! And 'Lucifer' and 'like' really aren't two words that you would put in the same sentence.  The relationship between Tommy and Jinx was really sweet, in a brotherly sister kind of way. I am so pleased  how Tommy's future turns out by the end of the book.
If I was to compare this to anything, it would be to the film, Little Nicky with Adam Sandler. Jinx has that same misfit quality to him.
The plot of the story is very good, although I guessed quite early on, who was trying to break down the wall between Heaven and Hell. However, this didn't spoil my enjoyment of the story.
This book is the first in a series and I know it will be fabulous to return to Hell later in the year to see what these two mischievous  kids get up to. I really hope at some point we get to meet Persephone, Jinx's mum, as she was mentioned quite a lot in this book.
This is a really great debut novel as well as a good read for the Middle Grade market. I really think this book will be loved by both girls and boys. If David Walliams wrote paranormal, this is the style of book he would write.