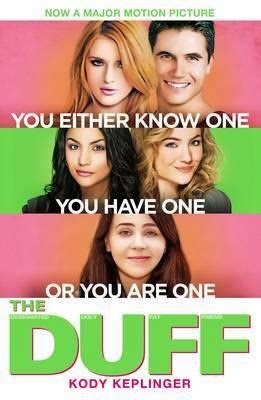 To coincide with the release of the film, I  thought it would be nice to repost my review of The Duff from way back in April 2012 when I read is as part of a special week on the blog dealing with how we look. The publishers have asked me to pass on the following message about the book.

Labelling is a huge issue in our society today, The Duff are partnering up with Ditch the Label which is a charity who are trying to overcome this, if anyone of you are suffering with any bullying make sure you check outwww.ditchthelabel.org for advice and someone to talk to.
Pages - 341
Originally published by Hodder Children's Books in April 2012 - Republished February 2015

Goodreads Summary
Seventeen-year-old Bianca Piper is cynical and loyal, and she doesn’t think she’s the prettiest of her friends by a long shot. She’s also way too smart to fall for the charms of man-slut and slimy school hottie Wesley Rush. In fact, Bianca hates him. And when he nicknames her “the Duff,” she throws her Coke in his face.

But things aren’t so great at home right now, and Bianca is desperate for a distraction. She ends up kissing Wesley. Worse, she likes it. Eager for escape, Bianca throws herself into a closeted enemies-with-benefits relationship with him.
Until it all goes horribly awry. It turns out Wesley isn’t such a bad listener, and his life is pretty screwed up, too. Suddenly Bianca realizes with absolute horror that she’s falling for the guy she thought she hated more than anyone.
*********
Duff is definitely one of those books I could imagine John Hughes directing back in the 80's; it just had that feel to it. Realistic, yet innocent at the same time.

Kody was seventeen when she wrote this book and is it obvious that she really understood the teenagers she mixed with. I do think this book gives a realistic view of teenage life today. I will definitely be keeping an eye open for Kody's next book.
at April 19, 2015