Anyone but Ivy Pocket written by Caleb Krisp 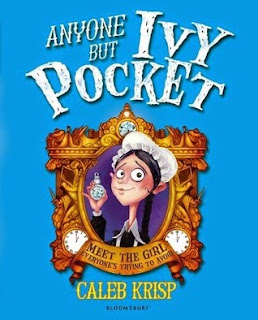 I found the note upon my lady’s bed.


It read as follows:
Dear Miss Pocket,
As you can see, I have gone. Do not follow me. I repeat, DO NOT follow me!
I am sailing for South America for no other reason than it is far enough away from Paris to ensure that I never see you again. The hotel bill has been paid. As for your wages, after taking into account my pain and suffering, I have left you the sum of one pound. Which is generous, given your conduct. You are now on your own.
Good riddance,
Countess Carbunkle
I was stunned. Shocked. Appalled. Hadn’t I been a loyal and kind maid to the Countess? Hadn’t I? I thought long and hard about my conduct and I could find nothing wanting in it. If I needed further proof that Countess Carbunkle was unhinged, I now had it. The woman was bonkers.
Illustrated by John Kelly
Published April 2015 by Bloomsbury
320 pages with 11 illustrations
Summary from Publisher’s website
Ivy Pocket is a twelve-year-old maid of no importance, with a very lofty opinion of herself. Dumped in Paris by the Countess Carbunkle, who would rather run away to South America than continue in Ivy's companionship, our young heroine (of sorts) finds herself with no money and no home to go to ... until she is summoned to the bedside of the dying Duchess of Trinity.
For the princely sum of £500 (enough to buy a carriage, and possibly a monkey), Ivy agrees to courier the Duchess's most precious possession – the Clock Diamond – to England, and to put it around the neck of the revolting Matilda Butterfield on her twelfth birthday. It's not long before Ivy finds herself at the heart of a conspiracy involving mischief, mayhem and murder.
Illustrated in humorous gothic detail by John Kelly, Anyone But Ivy Pocket is just the beginning of one girl's deadly comic journey to discover who she really is …
Reviewed by K. M. Lockwood
The whole story is told from the point of view of the ridiculous, indefatigable and frankly rather cheeky maid Ivy Pocket. It has a distinctive tone which readers will either find irritating or absolutely love.
As can be seen from John Kelly’s jolly artwork, it has plenty of slapstick humour – and many readers will thoroughly enjoy Ivy’s well-meaning but daft antics. But there’s more than just vaguely Victorian silliness – there’s a mystery and murder too. However, any violence is cartoon-like and would only upset the most sensitive. The inexperienced wouldn’t get the central joke of Ivy as narrator of her own folly, so it’s more suitable for competent readers. It would be great fun to read aloud.
There’s an unexpected layer to the story I won’t spoil – but having grown to rather like the brave and warm-hearted orphan Ivy, I found her search for her true origins both intriguing and surprisingly moving.


In short, great fun if you like Ivy’s tone of voice and have that sense of humour – and want a mystery alongside your comedy.
at May 14, 2015