Catch Me If You Cannes by Lisa Dickenson - Part 3 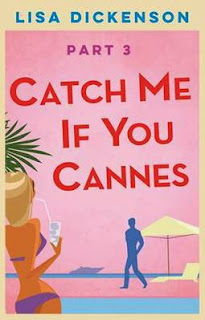 "You think Leo is a drug smuggler? That's ridiculous. Jess raised her eyebrows at Bryony, though her heart was beating fast. Ridiculous. It was time to turn this conversation off and retire to dreamland again. She slapped a smile onto his worried face. 'Okay, I'm going to go back to sleep.'
Published by Sphere in May 2015
Summary
Things could not be going better between Jess and Leo. Every moment they spend together is lovely and sunkissed and full of anticipation. Jess hasn't felt like this in a very long time and she doesn't want it to end. Sure, Leo is a bit vague about certain areas of his life but that doesn't mean anything.
Suddenly Jess's perfect holiday romance isn't looking so great and she has a choice to make - should she ignore what Bryony is telling her and keep living the dream, or should she run the risk of losing Leo in order to prove her friend wrong?


*******
So it's really clear that something isn't right with the perfect Leo, much to Jess's dismay. She can't get her head around the fact that Bryony might be right and Leo could be a drug's dealer. Everything was running along so smoothly until this. Jess has to make a decision to either help Bryony find the truth, or follow the feelings creeping through her heart. Jess has extremely good intentions, but just one look at Leo and she is too smitten to really care.
I did struggle with how easily Jess forgot and forgave Leo, when a stranger boarded the boat. I don't know if I would've been able to get over the intrusion as easily as she did. Bruno, the intruder, is a rather scary character and does add a sense of danger to the story, really making it seem that Jess and Bryony have got into this whole Cannes situation, way too deep.
Near to the end of this section of the story, an unexpected love triangle develops. I'm not going to say too much as I don't want to spoil it, but I was surprised to see it appear.
I loved the scene with Veronica where she tells all her secrets to Bryony, falsely believing they will appear in the Times. A brilliant, yet surprising LGBT twist.
The drama really starts to build back up in this part of the book, as the girls stumble through one lie after another. I loved it when Jess's family turned up unexpectedly, causing a few of their lies to crash and burn.  The ending was hilarious, leaving me intrigued as to what happens next. I'm really looking forward to finding out how this story ends. A great summery read.
at May 19, 2015

Email ThisBlogThis!Share to TwitterShare to FacebookShare to Pinterest
Labels: book review, catch me if you cannes, lisa Dickenson, sphere