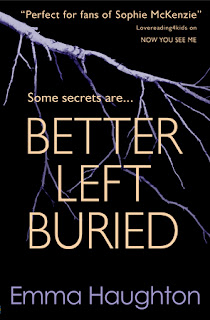 When it happens, I'm so lost in my thoughts I barely notice. A yank on the steering wheel and we spin into a U-turn, heading back up the road the way we came. I peer into my side mirror. Right behind us a large black car does the same manoeuvre.
My blood goes cold. Oh god...oh shit...it's true. They're really after us.

Published by Usborne in May 2015

Summary
Brother dead.
Best friend missing.
House ransacked.
Stalked by a stranger.
Attacked in the street...
...And Sarah has no idea why.
She never knew her brother was hiding a dark secret when he died. But now his reckless actions have led the wolves to her door. And the only way out is to run.
*****
I've wanted to read a book by Emma Haughton since her debut stormed through the publishing world last year. This author's debut novel quickly became a must on everyone's TBR list. But somehow, with the usual review pile toppling over, I never got around to buying it. So when I was offered Better Left Buried, I jumped at the chance to review it.

Just reading the quote on the front was thrilling! Now everyone knows how much I love Sophie McKenzie books, so for another author to be compared to her, I definitely needed to read the book.

Better Left Buried did not disappoint. It's the type of book that keeps you sitting nervously on the edge of the seat as you walk alongside the main character, desperate to find out what on earth is going on around her. At certain points, you could be forgiven for thinking Sarah had lost the plot, as everything that happens to her, occurs without witnesses. Luckily we know the truth!

Sarah puts her own future on the line to protect her brother's reputation. Such an endearing family bond to see. Sarah won't let her parents ever find out the truth and that shows a maturity beyond her age. Grief has a way of making you grow up fast.

The book is perfectly paced, with each chapter revealing just a little more to keep you turning the pages, desperate to discover what really happened. If I'm honest, I was a little surprised by the ending. I was convinced it would end differently and it felt as those things had been left quite open ended, so I wonder if a sequel might be in the pipeline.

This is one of those books that you read quickly. The way the tension slowly builds, draws you in so that you forget whatever else you are supposed to be doing and practically read it in one sitting. Emma Haughton obviously has a super power - she knows how to reel her readers in and won't let them go until the last line.

A fast paced thriller, full of twists and turns, which I completely agree would be ideal for fans of Sophie McKenzie!