Letter To My Younger Self by Helen Maslin

On Friday, Helen Maslin sees her debut novel, Darkmere published by Chicken House. I'm so happy to be able to welcome her onto the blog today, in a letter to her younger self. 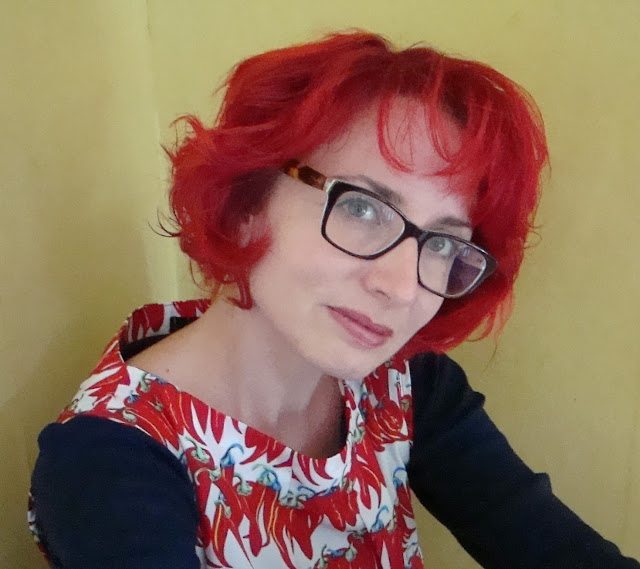 To my younger self...

It’s eight years ago. The middle of the night and raining hard outside. You are tossing and turning, heavily pregnant and unable to sleep because of a pain behind your left ear. Why the hell would you have a pain behind your ear?

When you finally get out of bed, you have to stare at yourself in the bathroom mirror for a long time before you work out what’s gone wrong. Half your face is paralysed and you can’t move it anymore.

At the hospital they tell you a virus has severed a nerve in your neck the way a mouse chews through an electric cable. This is the nerve that controls all the movement on the left side of your face...only now it doesn’t, of course. You can’t smile or blink or breathe properly through your nose. This doesn’t feel as if it’s going to be all right.

But it’s fine – that’s what the nurses tell you. It’s called a Bell’s Palsy and it isn’t serious. There are people in the hospital who aren’t fine – they have cancer, missing limbs, blindness. So you try to feel relieved and reassured. You try not to think about how badly you want your face back.

Out of the hospital, people look at you with shock or pity or embarrassment – sometimes all three. ‘This isn’t what I really look like!’ you want to tell them. But that only makes them more embarrassed because your lips aren’t working properly and what you’ve actually said is ‘Flllffle-Wffffle.’

The doctor told you it was your pregnancy that prevented you from fighting off the nerve-eating virus, so when your baby is born, you’re horribly afraid you’ll blame him. Although you never admit it to anyone, you worry that you’ll look down at his perfect little face with your hideously twisted one and think: ‘This is your fault – you did this.’ 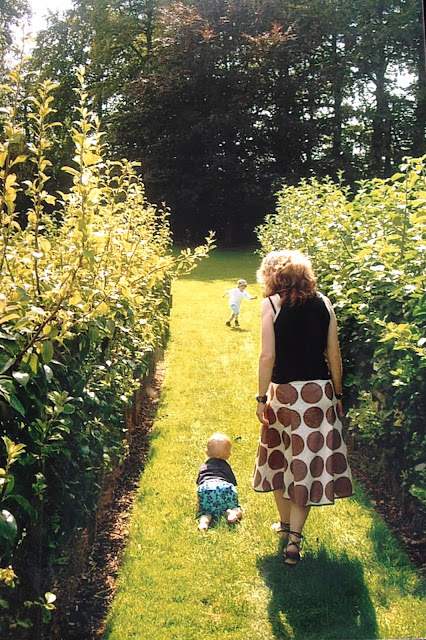 But it’s all right – you fall in love with him so hard all you want to do is show it. That’s where the real trouble comes in. Although you try to tell him how much you love him with your tone of voice and your touch, he never gets to see the feelings on your face. You can’t kiss him - not properly.

After only a few days his eyes begin to focus and you see him taking you in. You have to fight against all your newly-acquired defence mechanisms – ducking your head, hiding behind your hair, holding your hands close to your mouth. You force yourself to meet his gaze and try to look like it’s all right.

The smiling is the worst. The first time he smiles it hits you in the back of your throat and makes you grit your teeth. You want to smile back so much it feel like you might burst with it. He begins to catch you unawares. He smiles suddenly – at a patch of sunlight on the wall; at his own toes; at the noise made by a passing car. Sometimes he smiles at nothing at all. And if you’re not concentrating, your dreadful face tries to smile back.

Inevitably his smile changes. You notice it before anyone else. Only one corner of his mouth lifts, he bares his gums lopsidedly and a leering grimace takes over his tiny face. Because you’re his mother and he’s begun to learn from you.

It feels very far from all right.

Of course, you don’t want anyone to see. Unlike many new mums, you are happy to stay indoors. You read to your children and you make up stories of your own. You even write them down. When your youngest is three months old, you feel the first tiny twitch of movement in the dead side of your face. It isn’t much, but it’s better than nothing. Very slowly...your smiles grow straighter together.

Your stories get better too.

The first one you send to an agent includes a character whose face is damaged. Oh, don’t worry – it isn’t a misery memoir. It’s a YA romp with drunken teenagers, smugglers’ tunnels and a ghost! But there’s also a girl who loses everything along with her face and you can’t help wondering if you’re trying to tell yourself that it could’ve been worse. You didn’t lose anything – not really.

One day in the summer, you’re out walking with your sons and the air is full of thistledown. Floating wishes. You catch one in your hand and you wish for a book deal. And you stop walking in surprise. There have been so many wishes over the years – on new moons, wishing wells or birthday candles – and you’ve always – always – wished your face would get better. Now – right out of the blue – something matters more.

The thistledown works (of course!) and the agent puts your photograph on her website among the ‘M’s for Maslin and such ridiculously-famous people as Davina McCall and Piers Morgan. Davina is smiling more widely than ought to be allowed, but you’re comforted by the fact that Piers’ face doesn’t look much less wonky than your own.

You’re also comforted by the fact that no matter how showbizzy your agent may be, the publishers she sends your ms to won’t be dauntingly famous. That wouldn’t be at all likely... 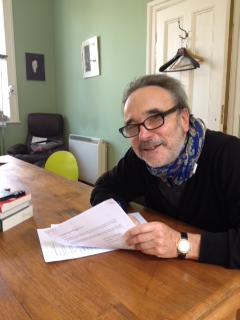 ‘Have you heard of Barry Cunningham?’ she asks you on the phone. ‘He’s the publisher who discovered JK Rowling – you might’ve seen him on Oprah? He likes your writing and he’s asked to meet you next week.’

‘Fine,’ you tell her, ‘I’m sure I can make a space in my diary.’ Only your lips must still not be working properly because it comes out as: ‘Holy shit!’

On the day you overhear your youngest son telling one of his school friends that his mum’s story is going to be published by Harry Potter’s publisher, your smile is so wide on the inside that it couldn’t matter less what it looks like on your face. And that’s my point here – it really is going to be all right.

That was what you most needed to hear eight years ago, but – while I’m writing this letter – there’ll be plenty of other occasions when a word of advice or reassurance from future-you would be pretty useful. 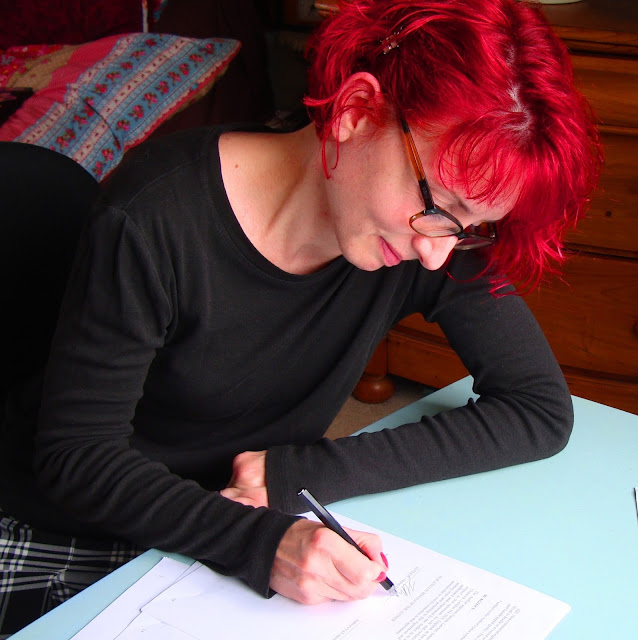 Like the time you convince yourself that your husband has died in a road accident. He’s actually stuck in traffic and has let his phone battery die. He isn’t dead – he’s just a jackass.

Or the time he persuades you to buy the navy duffle coat. If you don’t resist his advice, you will look like Paddington for an entire year. Like I said – jackass.

Same deal with the over-sized felt hat. It’s groovy and I can still see why you buy it, but it never makes you look like Lisa Bonet. Again – Paddington.

Oh – and that stomach bug you’re trying to shake off in early 2015? You should call an ambulance. Seriously, your appendix has just burst and the wait in A&E will be excruciating.

But in the end, the bits that hurt won’t matter any more than the hats or the duffle coats. In the end, everything is going to be all right. 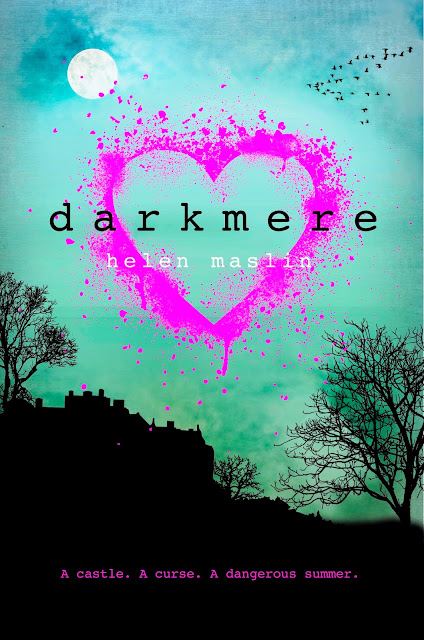 Darkmere is published in August by Chicken House.

Summary
A castle. A curse. A dangerous summer. Leo has invited Kate and a few friends to spend the summer at his inheritance, Darkmere Castle: as wild and remote as it is beautiful. Kate thinks it will be the perfect place for her and Leo to get together - but instead, she's drawn into the dark story of a young nineteenth-century bride who haunts the tunnels and towers of the house. And whose curse now hangs over them all.

Email ThisBlogThis!Share to TwitterShare to FacebookShare to Pinterest
Labels: chicken house, darkmere, helen maslin, letter to my younger self