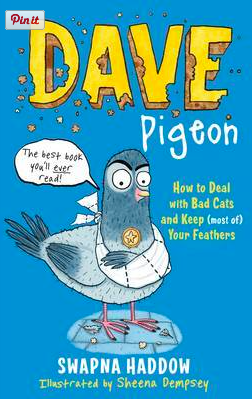 Dave and me were on a routine croissant heist. It was something we'd doe at least a hundred times before.
In fact, the first time I met Dave was on a croissant heist. Back then, Dave told me he had just won a Medal of the Brave which he wore all the time. (Though I heard a rumour later it was just a bottle top that had got stuck to him with a piece of chewing gum when he got caught in a bin bag once).
Published by Faber Children's Books in April 2016
Ilustrated by Sheena Dempsey
Pages - 155
Summary
Join Dave Pigeon and his sidekick Skipper on their quest to defeat the most evil cat in town. There will be funny bits, scary bits and biscuity bits...
****
What an adorable yet hilarious book! Dave Pigeon is a brilliant and original character who you are rooting for as soon as you meet him. He is definitely one of a kind. He's not perfect, as he may have a touch of the dramatics with his tall stories, but he's a fighter!
I couldn't stop smiling as I read about Dave and Skipper's constant changes of plans to get rid of Mean Cat. They really highlighted the brain power you imagine all pigeons to have. If pigeons could have a spoke person, I am pretty sure Dave would be in the running for the job. Human Lady has a heart of gold, though not sure I would want a pigeon living in the house.
The illustrations really match the descriptions of Dave and Skipper, helping to bring these characters alive. I can't imagine any child not loving Dave and waiting excitedly for his next adventure.