The School Wars blog tour is on! Are you a St Grizzle's fan or Beaky Malone fan? I'm very much in the Beaky Malone fan club! However that's only because the first book made me split my sides and I've not read Karen's book yet. Anyway, let's hear it for Beaky Malone author, Barry Hutchison, as he tells us about his five biggest fears! 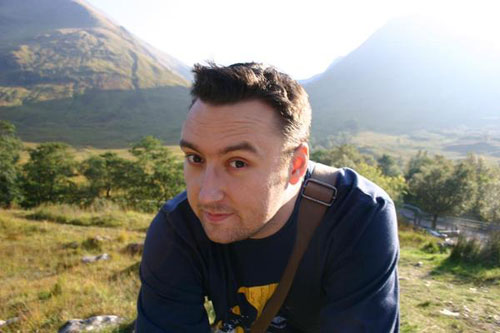 Hello! I’m Barry Hutchison, author of the Beaky Malone series, about what happens when the World’s Greatest Liar loses the ability to utter a single fib. The second book in the series, Worst Ever School Trip, sees Beaky and his classmates head off on a school trip with, if I do say so myself, flippin’ hilarious consequences.
While on the trip, the school bully, Wayne, is forced to face up to one of his greatest fears, which got me thinking about some of the things I’m most scared of. On the off-chance you’re interested, here – in no particular order – are a few of them.

5. Stuffed animals
No, I don’t mean teddy bears and the like, I mean this sort of glassy-eyed unpleasantness: 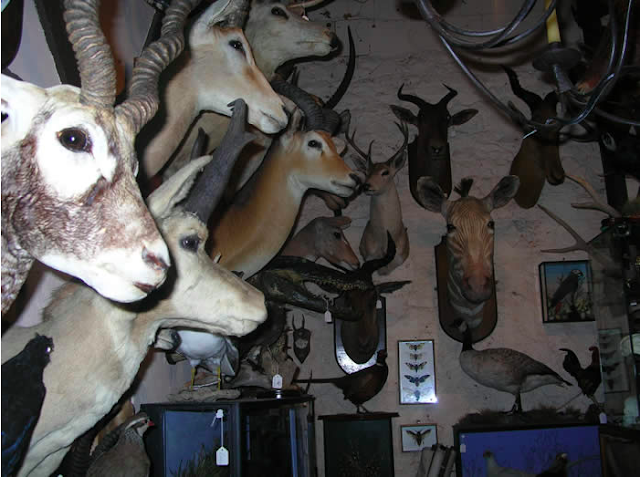 Taxidermy. The art of taking a dead animal, tearing out its guts, then ramming it full of sawdust. The result? A dignity-free afterlife for the animal, a dose of unrelenting terror for me.
I mean… why? What’s the purpose? Who can honestly say they would enjoy being inside that room, with all those vacant, yet somehow accusing expressions staring blankly down? I think if I ever found myself inside such a room, my brain and central nervous system would simply switch themselves off, killing me instantly. That’s how scared I’d be.
I found the above image on a Taxidermy site online. Perhaps the most worrying thing is, it isn’t even the worst one. Check out this horror-show… 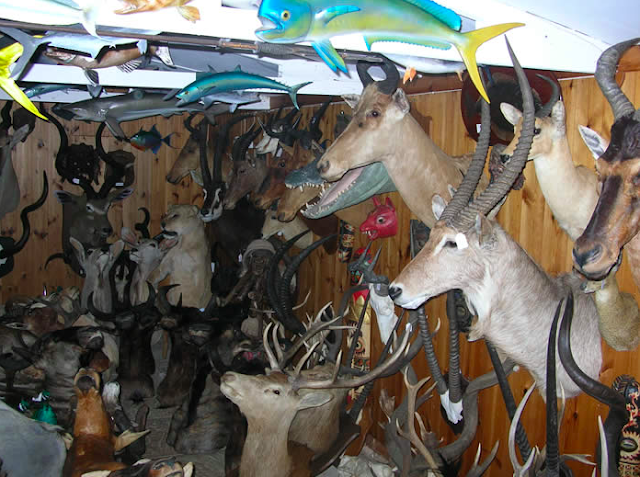 What in God’s name is that red thing in the middle?? The thing with the demon’s eyes and teeth? What is that? That’s no animal I’ve ever seen. Not while awake, anyway.
Right, onto the next one before a panic attack renders me immobile.

4. Everything in the sea
Now, I don’t just mean this sort of thing… 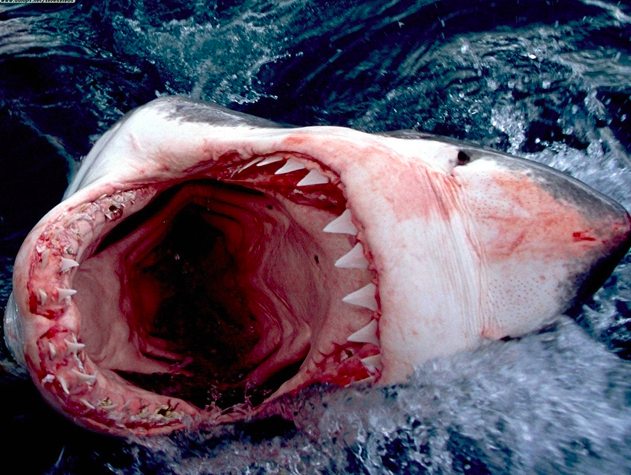 …although, that picture is probably enough to stop me so much as washing my face for at least four days. But no, I literally mean everything in the sea. Little fishies like the ones in Finding Nemo, seahorses, turtles, crabs, seaweed, jellyfish, starfish, Michael Fish – whatever, if it lives in the sea, and it isn’t on a plate with chips, I want nowt to do with it.
Why? Because the sea is dark and cold and filled with things that can sting, or bite, or nip, or – in some cases – impale human beings until they die in horrific agony. Going for a swim in the sea is the equivalent of going for a picnic in a monster’s cave. Oh, sure, there’s always a chance the monster won’t be around, but what if he is, people? What if he is??
Don’t believe me? Here’s some things you’ll find waiting for you in our oceans… 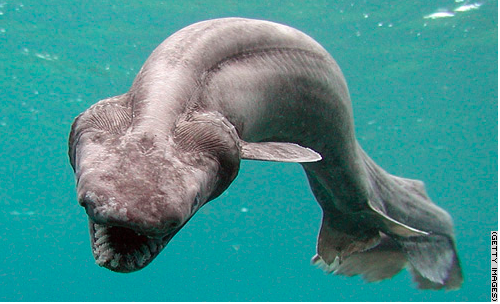 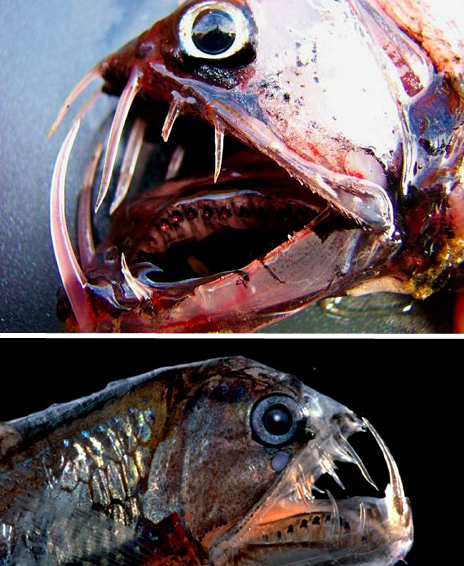 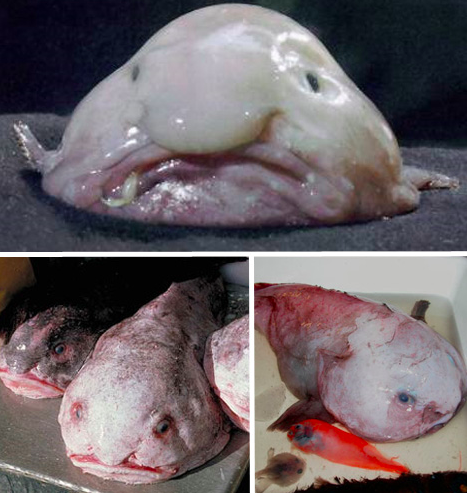 THE BLOBFISH:
(I have a recurring nightmare involving waking up and finding one of these lying on my chest and/or face.)
And finally, this thing. 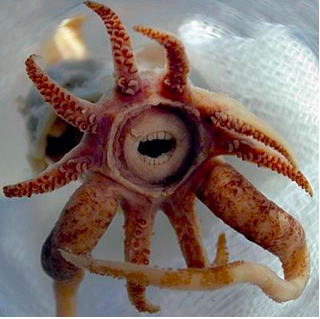 I have no idea. Seriously, not a clue, but it has human teeth!
See what I mean? When you go into the sea, you are entering uninvited into these creatures’ home. So, if anything happens to you, you’ve only got yourself to blame.

3. The Theme Tune to News at Ten 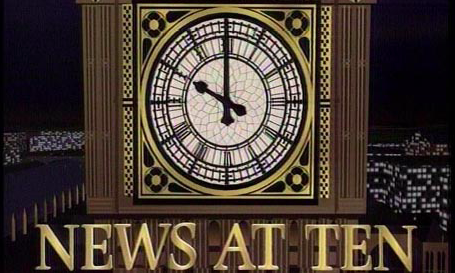 Some of my readers will be too young to remember the News at Ten theme as it sounded when I was growing up in the 1980s. If you haven’t heard it, or if you need a refresher, have a listen now.
Download Link: http://www.barryhutchison.com/wp-content/uploads/2010/11/ITN-News-at-Ten-1982.mp3
This theme tune used to absolutely terrify me as a kid. It actually starts out reasonably OK, but quickly builds to a frenzied, ominous finale designed to chill your very soul.
Somehow, the News at Ten theme manages to go beyond being merely a scary piece of music, and becomes a musical representation of terror itself. News bulletins rarely report happy news, but the News at Ten theme was so sinister and foreboding I always expected the headline story to concern the imminent end of the world, complete with graphic depictions of blood pouring from the sky and plagues of insects descending on terrified children.
In fact, it could very well be the theme tune to Armageddon itself. Come the Day of Judgement, we will all be lined up as the News at Ten music is pumped out of hidden speakers at a bone-shattering volume. Then, with each Apocalyptic BONG, another million souls will be sent hurtling headlong into the fiery pits of Damnation.
“Death is coming” – that’s the warning implied by the News at Ten theme. “And it is coming for you.”
Or, you know, that’s how I felt about it at the time, anyway.

2. Inhaling a Wasp
I’ve had my share of problems with wasps over the years, leading to me writing an open letter to their entire species a few years back. Like a lot of people, I’m wary of being stung by wasps, although the number of stings I’ve had mean I’m quite relaxed about the whole experience now.
But those are stings on the outside. I have recently found myself wondering what would a sting on the inside be like? Specifically, what would it be like to be stung repeatedly on the lining of my lungs, following the accidental inhalation of a wasp or wasps?
I don’t know why I specifically mentioned the “accidental inhalation” of wasps there, as if anyone would ever deliberately inhale one. Still, you never know, I suppose.
Picture the scene – you’re out walking on a pleasant summer’s day. You’ve fed the ducks, watched children playing with their dogs, and you decide to take a stroll up a nearby hill to enjoy the view. You’re halfway to the top, breathing heavily, but feeling more alive than you’ve felt in years when – BAM! – you inhale a wasp.
You cough and splutter, but it’s too late – the wasp has already been sucked into your respiratory system. In one sharp intake of breath it has been pulled through your windpipe, and has become trapped in the mucus membrane lining of one of your lungs.
What would happen next is anyone’s guess, but in the eight-hundred or more times I have imagined this exact scenario, the wasp would quickly become panicked and enraged, and start attacking for all its tiny life was worth. Again and again it would plunge its venomous stinger into the inside of your lung, causing wave after wave of excruciating pain.
What’s more, because of the steady flow of air into your lungs, the wasp would likely stay alive for hours in there, if not days, stinging you over and over again until it eventually died of hunger or thirst. That’s assuming, of course, that it couldn’t eat and drink your lungs mucus lining – if it could, then it’d stay alive for anything up to 25 days, before eventually dying of old age. Inside your lung. Where it would remain, slowly decomposing, for years to come. The nasty little blighter.
I’ll grant you, it’s an unlikely scenario, but the thought of it still keeps me awake at night from time to time.
By which I mean 3-5 nights a week.
By which I mean I never sleep for fear of night-time wasp inhalation.

1. Clowns!
I’m not going to dwell on this too much, in case my head implodes through sheer terror. When I was six years old, my older sister made me watch a movie called Killer Clowns From Outer Space. It was a horror film about… well, about killer clowns from outer space. The clue’s in the title.
Anyway, I lay awake for half the night, convinced clowns were going to come and murder me if I shut my eyes. When I did fall asleep I was haunted my nightmarish visions of alien clowns grabbing for me from the shadows, and would wake up sobbing, screaming and – one on occasion – soiling myself.
Next morning, I told my sister how scared I’d been and she said, “Aw. I’m sorry about that. That was really irresponsible of me. I tell you what… I’ll show you a nice film about clowns, and that’ll make you realise that clowns are nothing to be afraid of.”
And then she showed me this. 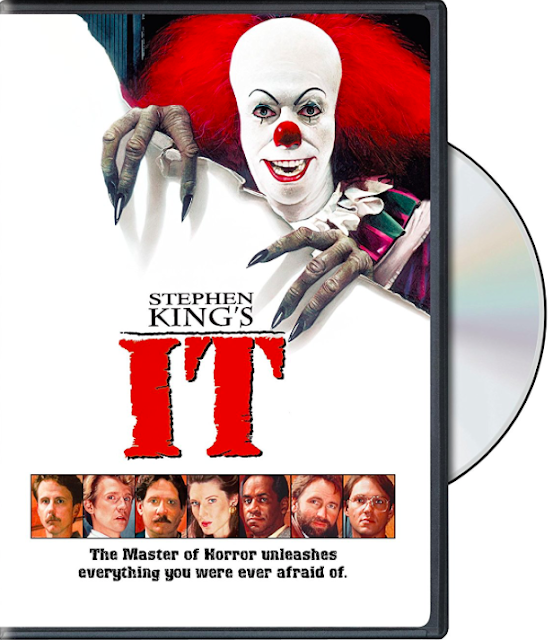 And I have never been able to look at clowns again since.
---
And if scary clowns are up your street (not literally, that would be terrifying) check out Beaky Malone: Worst Ever School Trip and meet the most frightening theme park mascot of all time… 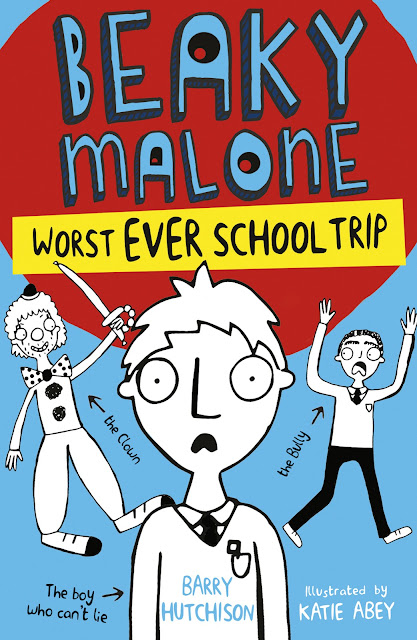 Summary
A hilarious new series from best-selling author, Barry Hutchison, perfect for fans of Tom Gates, Wimpy Kid and Barry Loser.
“I like to smell my own farts…” Gah! Someone shut me up!
It’s been 92 hours since Beaky last told a lie. So far he’s survived two full days of school with only three light beatings, two telling-offs and one wedgie ... but the annual school trip is going to take Beaky’s survival skills to a whole other level – especially as a mix up in the school office means that Beaky and his class are on a trip to Learning Land, an educational theme park aimed at eight-year-olds. And home to cheery-but-creepy Clumso the Clued-up Clown whose job is to dish out fascinating facts to one and all.
But there is worse to come when Beaky’s partnered with Wayne, a.k.a the school bully, who has a morbid fear of clowns. With Beaky unable to tell a lie and Wayne intent on beating him up, things aren’t looking good. And that’s before they find themselves on the run from a manic clown who’ll seemingly stop at nothing to track them down…
To find out more about Barry Hutchison:
Twitter / Website