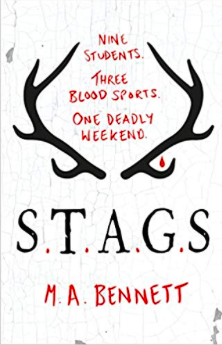 This is the third book in the ABA shortlist that I've read so far, and I'd have to say the competition is really tight now. I honestly don't know if I would have picked this book up, if it hadn't been for the Amazing Book Awards, which shows how shallow I am, because it was a SENSATIONAL story!! I wonder if it's the cover or maybe it's the title of the book; I'm not sure, but something about the design would have put me off reading it. Thank God for the ABA's! This book is not like any other YA book around. In fact, I'd go to say the most original YA plot I've read in a long time.

I was gripped from the first line. Though if you are going to start a novel with 'I think I might be a murderer', you will easily win the reader over. I think that has to be one of the best opening lines ever. Who wouldn't want to know more?

The premise of the story is really strong. Greer Macdonald has won a scholarship to S.T.A.G.S (St Aiden the Great School) where everything is traditional and based on strong almost medieval values. The school is run by monks, the kids wear long black Tudor coats and there is an awful lot of chapel visits. On top of that, the new instant technological world is frowned upon; no phones, no TV, no computers, everything is old school.

Greer immediately sticks out from everyone else, but she isn't alone. There are others who just don't fit in with the in the crowd, the Medievals, who run the school. So Greer is surprised and delighted to find herself invited to a spend a few days at Henry de Wallencourt's (leader of the Medievals) country pile, for a delightful break of hunting, shooting and fishing. The weekend doesn't go as Greer envisages it. I'm not going to say anymore as I don't want to spoil it. All I can say is this book is a highly tense, page spinning thriller that will make you glad you went to a boring, old comprehensive school.

You know there is a murder that could happen at any moment, so  you keep reading, but you are kept in suspense through the book as to the who, where and how. The author knows how to keep you engrossed in the story until the end.  Greer struggles to come to terms with what she can see with her own eyes and that makes her doubt her decisions as the story progresses. Greer is a great character and her strength stands out from the rest. She didn't need any romantic connections at all, as she carried the story so well on her.

This book is psychologically twisted! It's about old money and power,  fighting the new world of instantaneous wealth, a battle that still exists today. It's about old wealthy families who have been rich since money was invented and their increasing distaste for new money and a new order within the world. It shows that in life, there is an order to everything and order will always win over chaos. I highly recommend this book. I can't actually think of another book to compare to it. Just read it, I promise you won't be disappointed.

And thankfully the book Gods have listened and a second book in the series has been commissioned. I only hope the wait isn't too long.