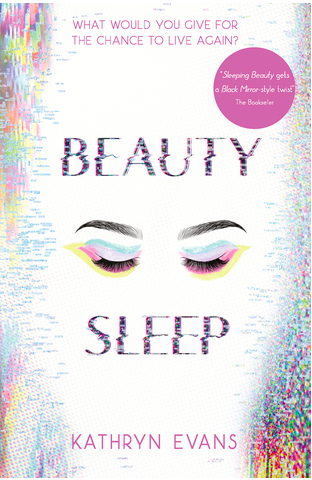 I had an inkling this book would be good, but I wasn't expecting it be as amazing at it was. I know you may think I'm biased as Kathy is a friend, but I'm sitting here with my hand on my heart, telling you the truth, this book is good. It's so good, I read it in two sittings and I honestly don't have time in my life to just read, so for me to sit glued to a book, it has to blow my mind. And this did. Kathryn's debut novel, More of Me was a sensational read, but this takes the author to a whole new level.

If you haven't heard about this book yet, let me give you a brief summary of what it's about. The story is told from a  dual perspective and in first person. The first main character is Laura, who was cryogenically frozen in 1986, alongside her little brother, after they both fell fatally ill. Forty years later, Laura is brought back to life and cured of her illness a few years into the future. However, she might still be only a young girl, but everyone she ever knew has aged forty years, some might still not even be around. Laura struggles with her new future, the new fangled technology, the obsession with white teeth and the fact that John Taylor from Duran Duran is no longer eligible for her to marry. Laura is given everything she needs to survive this new world, but all she craves is her old life.

The second main character, Shem, is a homeless lad, who has turned his back on society, modern technology and basically living inside anywhere. He gets caught up in Laura's new world against his will.

The two main characters are unique and completely believable. I felt sorry for Shem as he defied the people who wouldn't stop chasing him. All he wants is a quiet life with his dog. He is a typical teenage boy without the ties of normal life. And my heart broke for Laura, and the people that were no longer in her life.

There are some great secondary characters. I really like Marsha, especially her Creme Egg obsession.  Stacey was  brilliant and complemented the rest of the cast. The school also feels like an honorary member of the cast and if I'm right, I believe it is based on a highly prestigious school in my local area.

The science behind the cryogenics is a bit mind blowing if you think about it, but I love how Kathryn made it seem such an easy thing to do. The story doesn't bog you down with how it all works, which will suit the young teenage market it is aimed at.

Kathryn has explored future technology and come up with some amazing concepts. I'm only hoping Microsoft and Apple, are just a step behind her. Who wouldn't want to walk through train turnstiles and pay by Airpay, instead of getting caught in a queue? Kathryn has also taken FaceTime to a whole new level.

The plot is full of unexpected twists and turns which leave you wondering what the hell is going on. At the end of every chapter, I'm practically scanning through the pages to find out what happens next. How I resisted the urge to read the ending before I got there, I have no idea.
There were a few elements of the ending, I seriously didn't see coming. Also everything gets extremely traumatic, really picking up the pace.
There's loads more I could tell you about the book, but then I'd be giving away too many spoilers. So I will leave you to read it with relish.

Kathryn's writing has gone from strength to strength with this novel and she is carving out her own little niche within the Young Adult Science Fiction category. A spark of pure genius!