Well I didn't actually get any books in the post, but I did buy some from the boot sale on the weekend. Just out of interest do you have boot sales in America and Canada? A boot sale is where everyone takes all the things they don't want anymore to a big field and sell the stuff out of the back of their car boot. They are fabulous places to go to find books and they normally sell at about 50p each, so my bag is usually full.
This first picture shows the six books I got off one stall and paid 60p for the whole lot. That is 10p a book! The Marina Lewycka one is a hard back and I think it only came out at the end of last year. The two Tony Hawks books and McCarthy's bar are all travel journal style books which I really enjoy. Tony Hawks is a comedian on television and his books are supposed to be really funny, so I look forward to reading those.
Why Don't Penguins Feet Freeze? came out just before Christmas and is full of scientific questions that people genuinely ask on a daily basis. 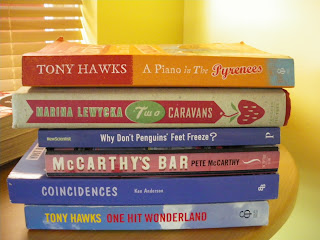 Here are the other books I picked up. I spent a total of £3.60 at the boot sale and came back with 12 books. An absolute bargain. 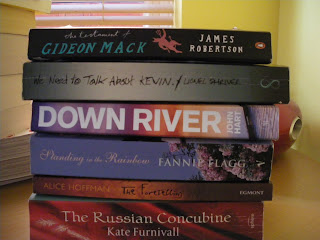 1) The Testament of Gideon Mack by James Robertson - Set in contemporary Scotland, the novel uses the literary device of a discovered manuscript the testament of Gideon Mack which has fallen into the hands of a journalist
2) We Need To Talk About Kevin by Lionel Shriver - a fictional school massacre, written from the perspective of the killers mother. It won the 2005 Orange Prize for fiction.
3) Down River by John Hart - Going back is never easy . . . Adam Chase has spent the last five years in New York trying to forget. When he left North Carolina, Adam left for good. Now he has no choice but to return – and being remembered as a murderer doesn’t help.Within hours of arriving, Adam is beaten up, accosted and has to face the hostility of those closest to him, including Grace, the young woman he cannot forget. Nothing has changed. And then people start turning up dead. For a man only just acquitted of murder, Adam’s homecoming does not go well.
4) Standing in the Rainbow by Fannie Flagg - I just loved Fried Green Tomatoes at the Whistlestop Cafe and I will always pick up Fannie Flagg books. The is set in the 1940's and the South. It takes a look at a town, where a family of white gospel singers descend.
5) The Foretelling by Alice Hoffman - a young adult book. The book is about Rain, a girl with a certain destiny, living in the ancient time of blood and war, raised on mares’ milk, nurtured by the strength of her Amazon sisters. A girl of power, she rides her white horse as fiercely as any demon.
6) The Russian Concubine by Kate Furnivall - Lydia Ivanova believed her father was killed by the Bolsheviks. But when she learns he is a captive in Stalin’s Russia, the fiery girl leaves everything behind – even her Chinese lover, Chang An Lo – to find him. With her half brother Alexei, she begins a dangerous search.
I am really pleased with the books I bought at the boot sale this week, especially as I got them so cheaply. They were all in perfect condition and looked like they had not even been read.
What books came to your house this week?