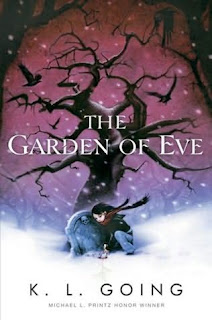 I have really missed writing this post as it is definitely one of my favourites. I love to share with you the wonderful books I find each week and I have been missing for two Fridays!

'Evie reluctantly moves with her widowed father to Beaumont, New York, where he has bought an apple orchard, dismissing rumors that the town is cursed and the trees haven't borne fruit in decades. Evie doesn't believe in things like curses and fairy tales anymore--if fairy tales were real, her mom would still be alive. But odd things happen in Beaumont. Evie meets a boy who claims to be dead and receives a mysterious seed as an eleventh-birthday gift. Once planted, the seed grows into a tree overnight, but only Evie and the dead boy can see it--or go where it leads. The Garden of Eve mixes spine-tingling chills with a deeply resonating story that beautifully explores grief, healing, and growth. '

Carrie reviewed this book and had me quite moved by it. Here is a passage from her review.

'This is a really beautiful story about a father and daughter trying to find their way through a profound loss. Anyone who has ever lost someone close to them will appreciate the emotions that Evie experiences throughout this book. ' 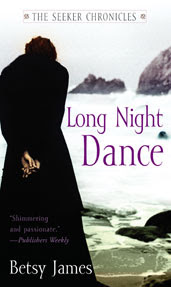 2) Long Night Dance by Betsy James
I found this one over at Teddyree's site The Eclectic Reader. It is a YA book which is the first part of a series.

Fifteen-year-old Kat is more her father's housekeeper than his daughter. Like all Upslope women, Kat must stay close to the hearth, far away from Downshore and its savage people. She must be respectable-and that means covering her wild red hair, finding a husband to take care of, and never singing, swimming, or dancing.
But Kat knows there must be more. She can feel it in her heart. She can hear the drums beating, drawing her to the forbidden beach. When Kat can no longer resist the call, she discovers what she thinks is a fatally injured seal washed up on the shore. Instead, what she has found is a Rig-one of a charmed race of mythical seal people. The only way to save this mysterious man is to defy her father and her community and seek aid in Downshore. But does Kat have the strength to stand on her own?

This was described on Amazon as 'One of those books that you read and then spend the rest of your life trying to find again.' 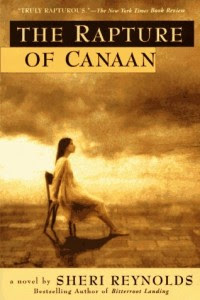 3) The Rapture of Canaan by Sheri Reynolds
This was mentioned by Diane over at Bibliophile By The Sea in connection with another book and took my attention. It was one of Oprah's book club picks back in 1997 and is a coming of age book.
Here is the blurb from Amazon.
'For 14-year-old Ninah Huff, growing up in the extended family community of the Church of Fire and Brimstone and God's Almighty Baptizing Wind has meant working on the communal tobacco farm, receiving harsh punishments for unintended acts, being different from schoolmates, and enjoying a few simple pleasures. Foremost among the pleasures have been the company and stories of Nanna, whose husband, Grandpa Herman, founded the church after surviving wartime combat and unilaterally controlled its finances, doctrines, and daily life. Then comes a pleasures surpassing all others in the person of 15-year-old James. Designated prayer partners, Ninah and James share rebellious ideas, tentative touches, and more (after beseeching Jesus to speak to each of them through the other), leaving Ninah pregnant and touching off events that shake the community and its faith.
The Rapture of Canaan is a book about miracles, and in writing it, Reynolds has performed something of a miracle herself. Although the church's beliefs and practices may seem extreme (sleeping in an open grave, mortifying the flesh with barbed wire), its members are complex and profoundly sympathetic as they wrestle with the contradictions of Fire and Brimstone's theology, the temptations of the outside world, and the frailties of the human heart. ' 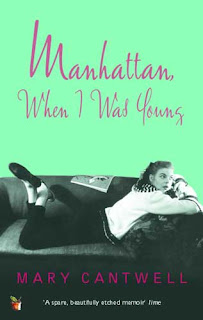 4) Manhattan When I Was Young by Mary Cantwell.

I found this book mentioned at the back of a book I have just finished reading and thought I would definitely enjoy it.

Here is the blurb from Amazon.
An easy-to-read autobiographical account of a fashion-magazine writer in the 1950s. Fresh out of college, Cantwell arrived in Greenwich Village and shared an apartment with a friend. Despite all the flair of metropolitan life, experiences with high-style department stores, exclusive little shops, theaters, parties, restaurant outings, and even a romance and marriage, she became increasingly depressed. Her close ties to a lovingly encouraging father were broken by his early death. She details the passage of years by describing the flats, houses, and apartments she lived in and the jobs lost and gained in her career pursuit. Despite Cantwell's lifelong involvement with psychoanalysis, her account is enlivened with the cheerful glamor of little black dresses, Steuben glassware, ethnic neighborhoods, and the whole ambiance of the city, presenting anew the eternal charm of the Big Apple for the young.

I love reading about New York and the 50's and 60's have always interested me, so I will definitely look out for this one.

Well that is my Friday Finds for this week. What did you find?