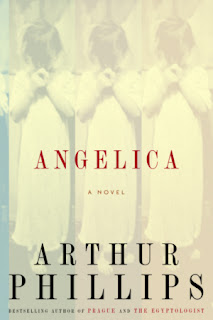 Published by Gerald Duckworth & Co in 2007

I suppose my prescribed busywork should begin as a ghost story, since that was surely Constance's experience of these events. I fear, however, that the term arouses unreasonable expectations in you. I scarcely expect to frighten you of all people, even if you should read this by snickering candle and creaking floorboards. Or with me lying at your feet.

I first saw this book over at Nymeth's blog where she had written a fabulous post about Victoriana books she was coveting. I wanted nearly all the books on the list and set about finding them in the library system. This one caught my eye first, as the idea of a Victorian ghost story sent shivers down my spine.

Angelica is a story set out in four parts, allowing each of the main characters to give their perspective on the series of events that occurred. It begins with Constance telling her side of the story. She married Joseph after he whisked her away from her lower class upbringing to allow her to live life as a lady of some means. He was the husband she had dreamed of. Throughout her marriage, Constance was desperate to give her husband a child, yet after three miscarriages and a very troubled birth of her daughter Angelica, Constance begins to fear for her life. She no longer wants to carry out her wifely duties and keeps Angelica sleeping in her marital bedroom for four years. Joseph holds his patience well, but eventually he can tolerate the situation no more and Angelica is moved to her own room.

Constance begins to despise her husband and feels he is a threat to her relationship with her daughter. Stranger occurrences begin to happen in the house and Constance feels that evil is taking over. She calls upon the help of Ann Montague, a former actress turned spiritualist to help her banish the house of the evil spirit that taunts her. On the arrival of Ann, into the house, Constance watches as her world falls apart.

This book is not what it seems. As it unfolds you begin to realise that there is more at work here than just a ghost story. This is also a psychological drama that you gradually find out the truth to as each character tells their story and the part they played within it.

There is a scene where Constance visits her husband in his place of work, where he experiments on animals for the purpose of science. The whole scene is rather horrible and it hits you rather quickly that this still happens today and we have yet to move on from experimentation on animals.

In the first part of the book, you are supposed to feel sorry for Constance. I didn't feel any empathy towards her character at all. From the start, you realise that she has very mixed emotions, causing her to be rather highly strung a lot of the time, which she finds very difficult to control. She is unaware that her behaviour may be seen as odd. I felt I could see through her to how she really was and I don't think I was supposed to. I believe I was meant to feel sorry for her.

Constance is unwilling to have sex with her husband as she believes it will kill her. Childbirth was not easy for her and this is long before the time of safe sex, yet her husband searches for solutions to alleviate the problem and to find the woman he fell in love with.

By the end of the book, I felt very sad, watching how the events unfold and listening to Angelica's story as she enters adulthood. I felt that she was deprived of the love she deserved, due to her mother's attempts at blocking memories from her past.

This book was liking building a puzzle, where you reach the end and sit back fitting all the pieces together, only to be a little disappointed by the picture at the end. I felt a little empty by the end of the book.

I am unsure as to how I felt about the book at the end, because I am convinced that due to my skepticism I felt sympathy for the wrong characters. If I had felt more for Constance, I may have enjoyed it better. Though I will definitely read other books by Arthur Phillips, as I enjoyed his style of writing. I would be interested to hear if anyone else has read this book.

This book looks very closely at marriage, gender and class within the Victorian era, so if these subjects are of interest to you then I would definitely read it.