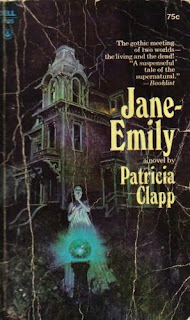 
I have really missed doing Friday Finds over the last couple of weeks as it is definitely my favourite post of the week. I thought as it is Halloween tomorrow, I needed to include a spooky book that I found around the blogging world.


I found this one over Kim's site Page After Page. I love the fact that this is a really old childhood favourite of many that has finally been released again after 30 years. It reminds me a little of a book called The Haunting of Cassie Palmer which I read as a child.
I absolutely love the cover.


Here is the blurb from Fantastic Fiction.

Emily was a selfish, willful, hateful child who died before her thirteenth birthday. But that was a long time ago. Jane is nine years old and an orphan when she and her young Aunt Louisa come to spend the summer at Jane's grandmother's house, a large, mysterious mansion in Massachusetts. Then one day . . . Jane stares into a reflecting ball in the garden - and the face that looks back at her is not her own. Many years earlier, a child of rage and malevolence lived in this place. And she never left. Now Emily has dark plans for little Jane - a blood-chilling purpose that Louisa, just a girl herself, must battle with all her heart, soul, and spirit . . . or she will lose her innocent, helpless niece forever. One of the most adored ghost stories of all time is available again after thirty years - to thrill and chill a new generation! 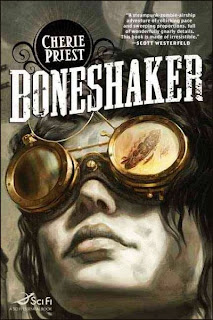 2) Boneshaker by Cherie Priest.
I found this book over at Chris's site Stuff That Dreams Are Made Of. This book really interests me as it comes under a genre called steampunk. What is that I hear you ask? Here is the description from wikipedia - 'The term denotes works set in an era or world where steam power is still widely used—usually the 19th century, and often Victorian era England—but with prominent elements of either science fiction or fantasy, such as fictional technological inventions like those found in the works of H. G Wells and Jules Verne, or real technological developments like the computer occurring at an earlier date.'

Here is the blurb from Amazon.
At the start of the Civil War, a Russian mining company commissions a great machine to pave the way from Seattle to Alaska and speed up the gold rush that is beating a path to the frozen north. Inventor Leviticus Blue creates the machine, but on its first test run it malfunctions, decimating Seattle s banking district and uncovering a vein of Blight Gas that turns everyone who breathes it into the living dead. Sixteen years later Briar, Blue s widow, lives in the poor neighborhood outside the wall that s been built around the uninhabitable city. Life is tough with a ruined reputation, but she and her teenage son Ezekiel are surviving until Zeke impetuously decides that he must reclaim his father s name from the clutches of history. 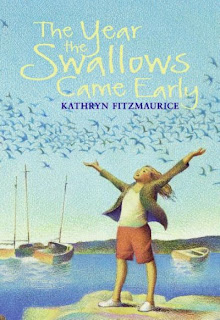 3) The Year The Swallows Came Early by Kathryn Fitzmaurice
I found this one over at Vasilly's site, 1330v. I love the cover and the story intrigues me.
Here is the blurb from Amazon.
With her passion for cooking, 11-year-old Eleanor, aka Groovy, dreams of becoming a professional chef. But her father, a compulsive gambler, bets away her inheritance from her great-grandmother, money she had planned to use for culinary school. At first Groovy is as angry as her mother, who has Groovy's father arrested, yet during the next several weeks she learns that broken dreams, and broken families, can be rebuilt. Debut novelist Fitzmaurice creates a sympathetic heroine in Groovy and an interesting sidekick in Frankie, whose estranged mother makes a sudden appearance shortly after Groovy's father is jailed.
So there are my book choices for the week. What did you find that you would like to read?