5) The Ice Queen by Alice Hoffman 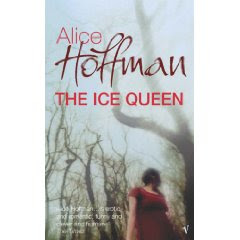 Challenges - What's In A Name 3 Challenge

Be careful what you wish for. I know that for a fact. Wishes are brutal, unforgiving things. They burn you tongue the moment they're spoken and you can never take them back. They bruise and bake and come back to haunt you.

The story begins with a little girl, making a wish she couldn't take back. Once her wish came true, her life was never the same again. She grows up with a heart touched by ice; never letting anyone come close enough to love her or allowing herself to love them back. Her life is non existent until a highly unlikely accident changes her life.

She is struck by lightening which affects so many parts of her body. The most noticeable is her inability to see the colour red, which makes everything have that white, snowy look about it. The lightening changes her life forever and results in her beginning a relationship with Lazarus Jones, a fellow lightening survivor who had died and come back to life. He is hot to touch and can boil water with his mouth, a suitable love match for an Ice Queen.

This was a really unusual story and had me searching for more information about lightening survivors. I had never considered the affects of lightening on people, but it seems to cause different reactions amongst it survivors. It never occurred to me how many different types of lightening existed either.

The story is very subtle and has a lovely fairytale feel to it. There are aspects to it, which make you feel like you have stepped back into your childhood. The natural elements that have caused the main character to appear like an Ice Queen are well written; the fact that she feels like her heart has ice in, as she feels responsible for other mother's death; the fact that everything looks like ice and snow to her because of her inability to see red anymore. She does come across as an Ice Queen who can no longer feel emotion for the people close to her. The character Lazarus, almost have a comic hero feel about him, where by a natural occurrence has left him with special powers. His ability to heat everything up, caused by the chemical reaction in his body,when they tried to bring him back to life just sounds surreal.

The main character of the book who is never named, comes across as hard and I found it difficult to warm to her at first. Her life has such limited boundaries as she has no idea our to interact with others and let them into her life. I kept wanting to stand behind her and give her a big push out into the world, so she could experience it. Lazarus is the first person that she has ever felt any emotion for. By the end of the book, as her sight returns to normal, you see her begin to thaw and realise that she does love the people who surround her.

I enjoyed this book a lot more than the last Hoffman one I read which was Skylight Confessions; the storyline was definitely more interesting and kept me engrossed until the end. I was rooting all the way through for the main character to actually feel the ability to love. The writing was beautiful, with Hoffman's vivid descriptions leaving an imprint in my heart.

The only thing I didn't like was the lack of love within the book. In both of Hoffman's books I have felt that her characters struggle to show any kind of emotion, which makes them appear cold, heartless and difficult to like for the majority of each story. This is obviously part of Hoffman's writing style, where her characters struggle to show emotion and that is fine, it just makes it difficult for me to feel anything for her characters. I really do want to love her books, as she brought the world my favourite film ever, 'Practical Magic, yet I am not feeling it. At least in this book, there was a happy ending and the main character learnt to love again and I did enjoy it a whole lot more than the first one I read. I just really want to love her work and I am struggling; so some more suggestions would be good as I refuse to give up on my quest.

Life And Times of a 'New' New Yorker.