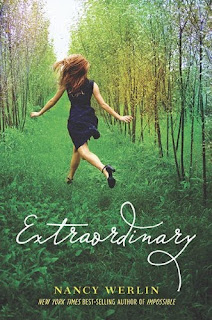 1) Extraordinary by Nancy Werlin.
I found this one over at Meg's blog Write Meg!
Here is the blurb from Amazon.
Phoebe finds herself drawn to Mallory, the strange and secretive new kid in school, and the two girls become as close as sisters . . . until Mallory's magnetic older brother, Ryland, shows up during their junior year. Ryland has an immediate, exciting hold on Phoebe but a dangerous hold, for she begins to question her feelings about her best friend and, worse, about herself.

Soon she'll discover the shocking truth about Ryland and Mallory: that these two are visitors from the faerie realm who have come to collect on an age-old debt. Generations ago, the faerie queen promised Pheobe's ancestor five extraordinary sons in exchange for the sacrifice of one ordinary female heir. But in hundreds of years there hasn't been a single ordinary girl in the family, and now the faeries are dying. Could Phoebe be the first ordinary one? Could she save the faeries, or is she
special enough to save herself? 2) Woman in Black by Susan Hill
I found this one over at Book Chick City. This is quite an old book dating back to the 80's which is having a bit of a revival at the moment.
Here is the blurb from Amazon.
Set on the obligatory English moor, on an isolated causeway, the story has as its hero one Arthur Kipps, an up-and-coming young solicitor who has come north to attend the funeral and settle the estate of Mrs. Alice Drablow of Eel Marsh House. The routine formalities he anticipates give way to a tumble of events and secrets more sinister and terrifying than any nightmare: the rocking chair in the nursery of the deserted Eel Marsh House, the eerie sound of pony and trap, a child's scream in the fog, and, most dreadfully, and for Kipps most tragically, the woman in black.

3) The Art of Disappearing by Ivy Pochoda
I found this over at Chaotic Companions
Here is the blurb from Amazon
When Mel Snow meets Toby Warring in a dusty roadside bar, she is instantly drawn to the brilliant magician who can pull roses from thin air and conjure castles out of desert sands. They marry two days later, and begin a life together in the shadow of Las Vegas, where Toby hopes to make it big. Mel knows that magicians are a dime a dozen, but Toby is different—his magic is real.

But as Toby’s renown grows and Mel falls more and more in love with his wonderments, she starts to realize that Toby's powers are as unstable as they are dazzling. She learns that he once made his assistant disappear completely, and couldn’t bring her back. And soon she begins to wonder if the love they share is genuine or merely a fantasy, conjured up by a lost magician looking to save himself from being alone.

4) Angel by L.A. Weatherly
I found this over at Clover's blog Fluttering Butterflies.
Here is the blurb from Amazon.
Willow knows she s different from other girls. And not just because she loves tinkering around with cars. Willow has a gift. She can look into peoples futures, know their dreams, their hopes and their regrets, just by touching them. She has no idea where she gets this power from... But Alex does. Gorgeous, mysterious Alex knows Willows secret and is on a mission to stop her. The dark forces within Willow make her dangerous and irresistible. In spite of himself, Alex finds he is falling in love with his sworn enemy.