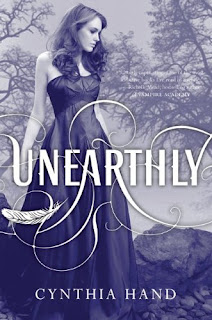 To Be Published in 2011 by Harper Collins

This book was sent to me as part of the International Book Tours.

The first time, November 6 to be exact, I wake up at two a.m. with a tingling in my head like tiny fireflies dancing behind my eyes. I smell smoke. I get up and wander from room to room to make sure no part of the house is on fire. Everything's fine, everybody sleeping, tranquil. It's more of a campfire smoke, anyway, sharp and woodsy. I chalk it up to the usual weirdness that is my life. I try, but can't get back to sleep. So I go downstairs. And I'm drinking a glass fo water at the kitchen sink, when, with no other warning, I'm in the middle of the burning forest. It's not like a dream. It's like I'm physically there.

Clara Gardner has recently found out that she is part angel and that her life has a purpose she must fulfill. She knows her purpose will happen soon, she is just not sure how it will happen. All she knows is that she must save a boy named Christian from a fire.  Clara and her family move to where they believe her purpose will occur and Clara struggles to come to terms with the changes that are occurring in her life.

Cast aside Hush, Hush and Fallen, this is an angel book that grips from page one and has you glued to the book until the end. Finally I have found an angel book that I can recommend. This really is the kind of book I have been looking for since embarking on the paranormal YA route, where even though it is part of a series, it reads like a roller coaster, twists and turns and shocks you as you fly through the pages and ends leaving you satisfied that everything has been taken care of but you are left wanting more.

The characters are well rounded, if not a little annoying at times.  My favourite had to be Tucker. He is adorable and rugged at the same time. I found Clara's mother rather strange as she seemed to keep her daughter in the dark too much about what she was capable of and I found that to be a little unrealistic, as most mother's would not leave their daughter's unprotected and unaware of what could happen to them. Clara was OK as a lead, if not a little flat. She was the perfect girl, who moves to a new area and has to start all over again, so you understand her insecurities about being the new person.

This book carries a lot of unexpected events, that made me sit and gasp. I would definitely say that parts of the plot were unexpected and threw me a little bit. It really is worth a read.